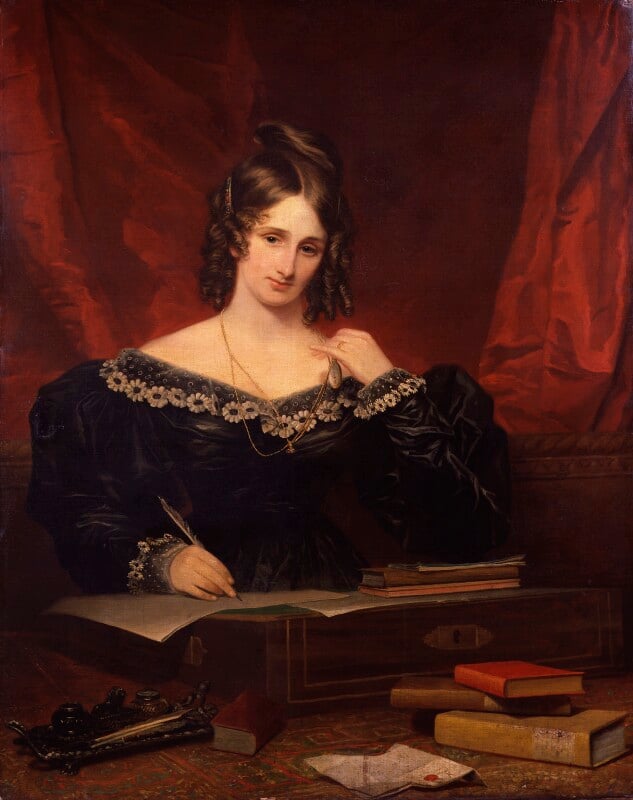 Half-length seated facing at a writing desk, in a low-necked black satin dress trimmed with white lace daisies; books (among them in red binding The Keepsake, 1831) and papers on a table with patterned cloth, red curtain background. She writes with a quill pen and holds up a gold locket in her left hand. Dark brown hair in ringlets and 'mane' on the top of her head with jewelled horse-shoe clip, grey eyes, fresh complexion, serious expression.

W. Holliday and bought from him 1913 (£40) as Laetitia Landon. On the portrait's acquisition in 1913 its identity was immediately changed from Landon to Mary Wollstonecraft Shelley, remaining so in the NPG catalogues until 1937 when it was decided that there was really no concrete evidence for identification with Mary Shelley and thereafter it has been classified as 'Unknown Woman 1831'. No provenance was given before 1913 and the identification seems to have depended on The Keepsake's being among her books. Both L.E.L. and Mary Shelley were assiduous contributors but one would have expected L.E.L. to display a book of poems and Mary Shelley Frankenstein in addition to The Keepsake. Female contributors to The Keepsake in 1831 were Mary Shelley (49), L.E.L. (10), Agnes Strickland (6), Lady Blessington (5) and Catherine Godwin (1). Fraser's Magazine in January 1836 illustrated a group of literary ladies, 'Regina's Maids of Honour', featuring L.E.L., Lady Morgan, Mrs Norton, Lady Blessington, Jane Porter, Miss Martineau, Miss Mitford and Mrs S. C. Hall. This group was by Daniel Maclise with an element of satire but it is not possible to match any of the ladies with NPG 1719. The most likely candidates are still either Laetitia Landon or Mary Shelley but neither can be proven.