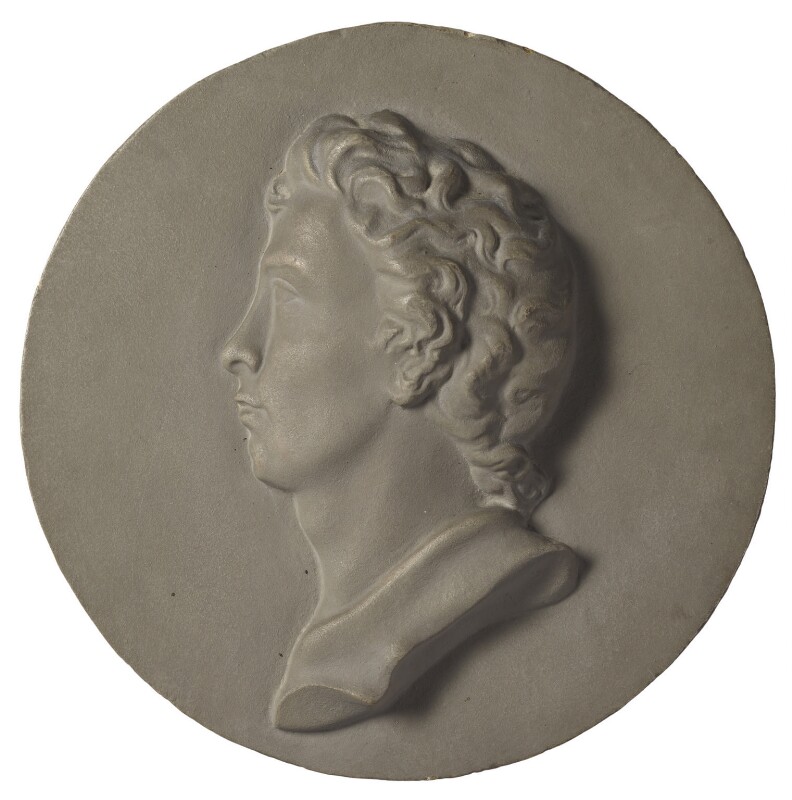 The medallion seems to derive distantly from Marianne Leigh Hunt's plaster bust of 1836 at Eton College, and is closely related to the engraving by Achille Collas after a model by E. W. Wyon. Mrs Leigh Hunt's bust was done from memory and possibly from a silhouette she had been asked to cut to help improve the Curran portrait (Mary Shelley's letters of 27 November 1823, 29 July and 22 August 1824). The bust was announced in the Court Journal, 11 June 1836 which quoted a prospectus about its publication (Sylva Norman, Flight of the Skylark, 1955, pp 133-8). Probably only a few copies were made, a letter acknowledging receipt of one by Thomas Barnes dated 4 July 1836 is in The Times archive (copy in NPG library); others were sent to Serjeant Talfourd, Carlyle, J. W. Dalby and others, and doubtless the Hunts kept one for themselves. Mary Shelley and her son disliked it and no copy was allowed in the Shelley 'sanctum' at Boscombe Manor. W. B. Scott who made an etching of the bust recollected Leigh Hunt's admission 'that his wife was not a thoroughly practised modeller but he affirmed the likeness to be perfect, reminding him of Shelley earnestly interested in conversation when he leant forward listening and ready to speak' (note by the Vice-Provost of Eton dated 16 January 1942 in the NPG archive). The medallion was once owned by Buxton Forman who immediately noticed its relevance to Mrs Hunt's bust but was unable to locate an original model. He suggested this may have been a wax profile similar to those Wyon had made of Wordsworth and Southey in 1835 and given as a present to Southey (Harry Buxton Forman's notes, pp 12-13). The plaster medallion is a poor thing, indeterminate and lacking in sensitivity and incisiveness, but it may well be a work by Wyon at second remove.

Thomas Chambers (private collector) 1877 and given by him to H. Buxton Forman whose son Maurice gave it to the NPG 1934.