5 of 3516 portraits matching these criteria: 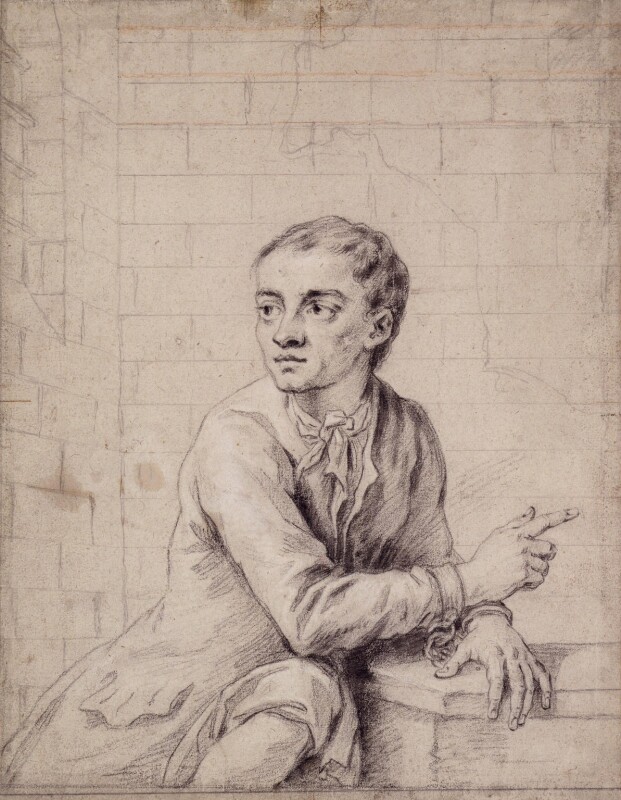 On the back, collection marks of Alfred Morrison [1] and Sir Bruce Ingram, [2] and in pencil, in a recent hand, Thornhill and Hogarth, the sitter's name and G. White in mezzotint.

Thornhill sketched Sheppard in his cell at Newgate during his final period of imprisonment before execution on 16 November. A lithograph of a pen and ink drawing, head only and presumably ad vivum, inscribed in Thornhill's hand J. Shepherd/Nov 5th/1724 was published by F. Alvey with the following legend: This Print is a careful Fac-Simile from the Original Sketch taken a few days before the Execution, by that celebrated artist Sir James Thornhil whose signature it bears. The original was part of the collection of the late J. Richardson Esqre and at present remains in the hands of the Publisher for the inspection of the curious. The original is now lost.
A three-quarter length pen-and-wash drawing, unattributed but with white highlights characteristic of Thornhill, was given to the London Museum by C. Fairfax Murray, 1912. NPG 4313 is in reverse to the mezzotint after Thornhill by G. White, suggesting at first sight that it might be the engraver's preparatory drawing; both show the sitter's face somewhat idealised. White's style, however, is more stilted. A comparison of NPG 4313 with pencil nudes in Thornhill's sketchbook in the British Museum points rather to this artist, [1] but the head seems too far from the London Museum type for firm attribution.

Two old damages in background, left of his shoulder; another, top right corner.