1 of 8 portraits of Sir Cloudesley Shovell 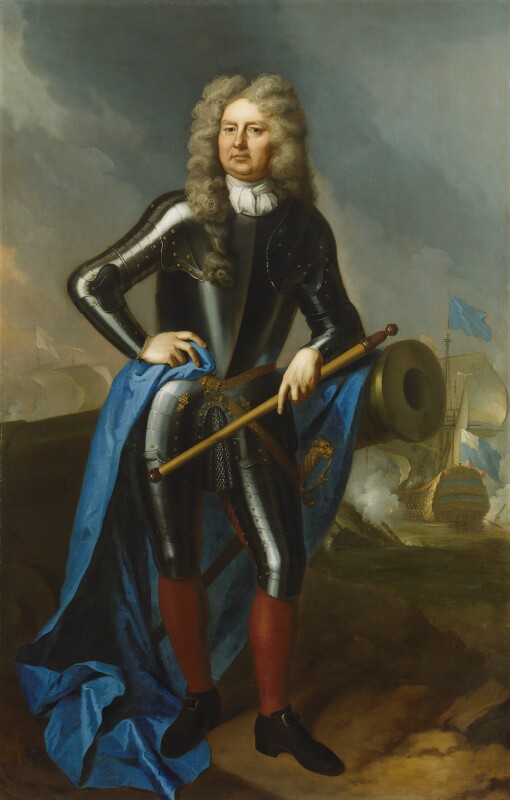 A studio version of the whole-length Dahl in the National Maritime Museum (BHC3026), which is signed and dated 1702. [1] NPG 797 shows a tucked-in scarf and the wig falling shorter over his right shoulder. Nisser [2] considered NPG 797 ‘immensely inferior to the excellent [three-quarter-length] Greenwich portrait [see below] … the modeling of the face is more spongy than is usual with Dahl … .’ A third whole-length is in the Guildhall Museum, Rochester (A2601). [3] A three-quarter-length engraving by J. Faber II 1723 (J. Chaloner Smith, British Mezzotinto Portraits, 325 as M. Dahl pinx. 1702) is closer to the Greenwich original, as are the mezzotints by B. Lens II (J. Chaloner Smith, British Mezzotinto Portraits, 18) and J. Simon (J. Chaloner Smith, British Mezzotinto Portraits, 134). Piper observed that this whole-length type may have derived from Dahl’s three-quarter-length
pattern, the heads being almost identical, although the three-quarter-length, as one of the set of Queen Anne Admirals, cannot be dated before 1702, the year the original whole-length is dated.

The sitter’s daughter Elizabeth, Lady Romney; by descent with the Earls of Romney;1 Christie’s, 9 June 1888, lot 361,2 bought Agnews for the NPG.

1 Lady Shovell bequeathed to her daughter ‘the Picture of Sir Cloudesley Shovell drawne at full length’ (PCC Bedford, f.120).
2 Described as ‘the property of a nobleman’; Agnews wrote to Scharf, 9 June 1888, saying they had managed to purchase the portrait [for 95 gns.] (NPG archive). Christie’s had previously offered the portrait to the NPG, on behalf of Lord Romney, for £250 (Trustees Minutes 22 February 1888).