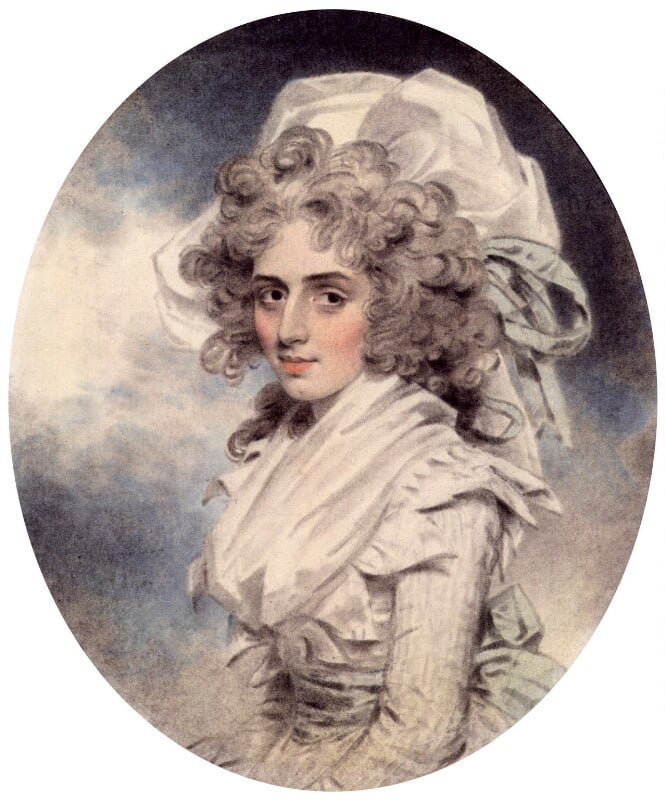 Inscribed by the artist, on a separate paper now mounted with the drawing: Mrs Siddons 1787. Original/The great Tragic Actress/I drew this for the Duke of Richmond, but/he preferred the Duplicate./Off the Stage I thought her face more/ inclined to the Comic. In 1787 Downman had collaborated with Mrs Siddons in private theatricals organised by the 3rd Duke of Richmond, providing portraits of contemporary beauties as stage scenery. [1] Downman’s discovery of ‘the comic’ in Mrs Siddons features led to NPG 2651 being criticised when shown at the RA, as being a portrait of ‘a pastoral coquette’. [2]
The second version, mentioned by Downman, also signed and dated 1787, was last sold Christie’s, 10 July 1990, lot 84. Slight variations (in, for example, the top of her hat and the fold of her waistband) indicate it was this second version which was engraved by P. W. Tomkins in 1797. [3]
An enamel copy by Henry Bone was in an English private collection in 1970 (yellow dress, purple ribbon in hair). A miniature copy was last sold Phillips, 11 November 1991, lot 7a.