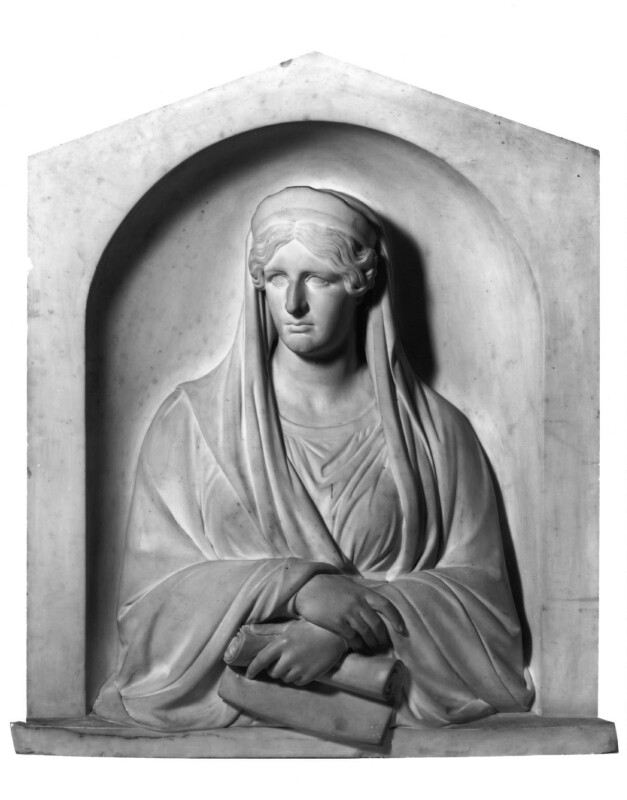 Campbell’s first proposal for the monument to Mrs Siddons in Westminster Abbey, for which the actor William Macready had long campaigned. [1] This first design of a ‘half length figure. In alto-relievo, in a niche’ was ready in 1843, and in 1844 it was confirmed that it would be placed in Westminster Abbey, although it could not be ‘considered as sufficiently important; but the sum subscribed was singularly small’. [2] But on 28 June 1845 Campbell promised to send Macready a drawing of a grander design, evidently the full-length version of NPG 642. On 27 February 1846 Macready advised Campbell of ‘a defect in the proportion; he admitted it, and promised to add length to the form below the bust’. By December 1846 Campbell had completed the model, ‘seven feet in height, ideally draped, and holding in the hand a scroll’, and the statue was installed in the Abbey in October 1849. [3]
On 9 April 1881 Gibson-Craig, the former owner of NPG 642, wrote that ‘All who have seen the statue & what I now offer, much prefer the alto relievo’:

'When I used to pass through London, I generally called at Campbell’s Studio & I several times tried to purchase the Alto relievo, but he never would part with it. After his decease, there was a sale of his works, [4] when I sent an order, and secured it.' [5]

Holding a scroll in her left hand, and wearing a coronet.

Bought from the studio sale of Thomas Campbell (d. 1858) by James Thomson Gibson-Craig, by whom presented 1881.