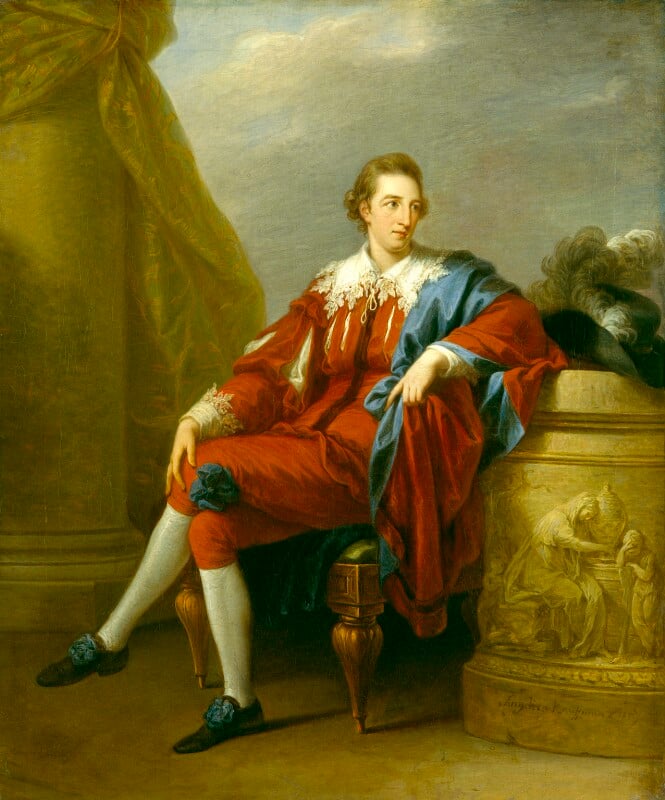 Simpson is an intruder within the National collection, NPG 1485 having been accepted in 1908 as a portrait of the actor John Palmer (q.v.), although it had previously been sold as a portrait of Simpson. The correct identity had been established by 1924 [1] and in 1925 the portrait was lent to Newcastle.
A replica is in a private collection in Sussex. [2] Both derive from the signed three-quarter length by Kauffmann dated 1777, formerly with the sitter’s descendants, which otherwise differs principally in showing a large urn to the right instead of the hat, and no slashes in the costume. [3] A miniature by John Smart, sold Christie’s, 14 October 1998, lot 160, apparently derived from Kauffmann’s composition. Kauffmann also painted three-quarter length portraits of his mother, dated 1767 (the year her husband sat to Reynolds), and of his wife. [4]
A silhouette inscribed John Simpson was sold Bonham’s, 2 February 2000, lot 4.

Blue eyes, brown hair, wearing a blue drape over a red Van Dyck costume, white stockings with blue rosettes at the knee and on the brown shoes; green chair and a green drape above; his black, plumed hat rests on a the pedestal bearing a classical relief of a grieving woman.

1 The Christie’s day book says the pictures were ‘from Mr Gambart’; I am grateful to Margie Christian for this information.