1 of 144 portraits matching these criteria: 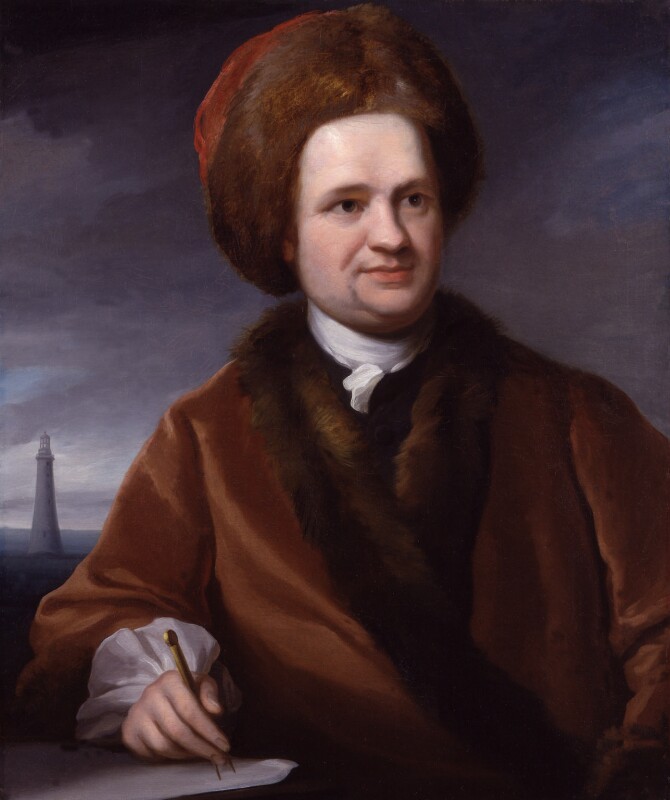 A version of the three-quarter length portrait, belonging to the Royal Society, London. Pose, face, collar and right hand are identical, but the working dress is changed to an elegant informal attire and the distant Eddystone lighthouse is better placed in the distance. NPG 80 was acquired as by an unknown artist, but from 1862 was catalogued as ‘probably by Rhodes’, on the basis of a comment made by a Mr Longbottom in the NPG visitors’ book on 21 November 1860:

'Smeaton’s portrait is either painted by Rhodes of Halton near Leeds one mile from Smeaton’s birth place or is it a copy of Rhodes’ likeness painted if I remember aright between 1774 and 1784. Some years ago about 1836 I saw the original by Rhodes in the possession of Mr Bywater then steward of Temple Newsam now the seat of Meynell Ingram Esq. Rhodes was a schoolfellow of Smeaton’s & died & was buried in Leeds in 1790, I believe his son is still living & has some celebrity as a local artist.' [1]
In 1904 Ward & Roberts showed that in 1779 Romney had made a copy of Mr Smeaton for Mr Sullivan; [2] Romney’s account with Sullivan shows on 26 June 1784 that 18 gn. was owing for ‘a copy of Mr Smeaton’. [3]
From this curious and sometimes conflicting evidence, it appears most likely that NPG 80 is the copy made by Romney for Richard Sullivan (for whom he also painted in 1779 the portrait of Macpherson, NPG 5804, who also wears a fur-trimmed gown). His son Sir Charles Sullivan was demonstrably mistaken in parts of his descriptions of the portraits sold in 1859 (see Garrick NPG 82 and Hastings NPG 81), and perhaps the alleged provenance of NPG 80 was also mistaken (or even confused with that of the Royal Society portrait?).
NPG 80 has been distinguished by being copied as a shop sign (as the Smeaton Stores in Rye, Sussex).

Brown eyes, wearing a red fur-trimmed hat, a brown fur-trimmed gown over a black waistcoat; dividers in his right hand and a view of the Eddystone lighthouse in the distance.