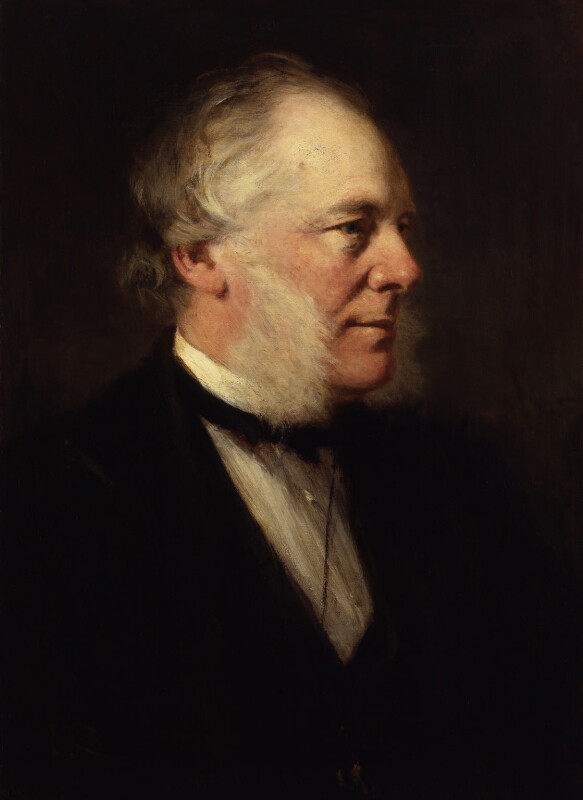 The most numerous and best-known images of Samuel Smiles are photographs; he apparently had less time for portrait painters. An artist he admired, however, was the young Aberdonian George Reid. Their association began around 1875, when Reid was commissioned to prepare the illustrations for Smiles’s Life of a Scotch Naturalist: Thomas Edward, published by John Murray in 1876. Reid then proceeded to paint four portraits of Smiles: as well as NPG 1377, painted in 1876, see ‘All known portraits, Paintings, drawings, sculptures and prints, 1878’, ‘1879’ and ‘1891’. Reid’s letters to Smiles written between 1875 and 1896, often several times a week, are an important source for his iconography; they are kept in the Samuel Smiles Papers, Leeds Archives, WYL78/A/V/1-173. [1]

In December 1875 Smiles invited Reid to stay in London. Reid chose the spring – the London exhibition season: ‘I shall likely turn up in London about the 8th or 9th May – and remain there for a month or six weeks as I have a couple of portraits to do before I can get north.’ [2] By 27 June Reid was back in Aberdeen; [3] and by early July could report that the case ‘with your portrait’ had arrived safely also. [4] In other words, Reid’s portrait of Smiles was begun in London in May or June and sent up to Scotland for completion. Later that summer Smiles joined Reid on a tour of Aberdeenshire, finding scenes to illustrate the Life of a Scotch Naturalist. [5]

The portrait was still in Reid’s studio on 8 September 1876 as he wanted to show it to the printmaker Paul Adolphe Rajon: ‘Mr Kesson called to-day and measured your picture for a case. I will have it sent to you next week – but I will keep it for a day or two till Rajon has seen it.’ [6] It was also seen by Sir John Everett Millais, travelling through for the sporting season: ‘Millais has been here for some days. He saw your portrait in my place and seemed pleased with it. The painting of the hair above the ear and about the side of the brow were the parts he spoke of most. I shall try to have it sent off to your address to-morrow [18 Sept.] before I leave – if not – then after my return to town.’ [7] Finally, in a letter of 27 September, Reid recorded Smiles’s satisfaction with the finished work. He made clear it was a gift. [8]

In January 1877 the picture again travelled north, as Reid wished to show it at the Royal Scottish Academy in Edinburgh. Some small damage occurred in transit (‘but it is only some bits on the coat and I will be able to set it all right in half an hour’). Reid planned to ‘overhaul’ the picture before exhibiting it. ‘I intend taking a little of the colour out of your face – as now that I see the picture with a fresh eye it looks somewhat red in parts of the flesh – I can easily do this without much risk of loosing [sic] the likeness.’ [9] On 31 January he wrote: ‘I sent off the pictures to the R.S.A to-day. I re-painted a good part of your portrait and I think it is much improved. The red in face and neck is more delicate & grey – the green background has give place to a warm [?]brown one – and the coat is warmer & richer. I am sure you will be better pleased with it when you see it on its return to Pembroke Gardens.’ [10]

The portrait was back in Aberdeen by May, and Reid oversaw arrangements to forward it to London: ‘I saw the gilder cleaning and repairing the frames of your and Tom Edwards portraits the other day and I suppose by this time both have been packed up and sent on to your address.’ [11] Smiles was indeed pleased with the changes to his portrait. Reid responded on 17 June: ‘I am glad you got the pictures back safely and think your own portrait improved. I think the change of tone in the background helped it greatly.’ [12]

The last reference to NPG 1377 in Reid’s letters at Leeds Archives is in February 1888, when he advised that ‘your portrait and [Thomas] Edward’s should be varnished and covered with glass’. [13] Smiles apparently acted on this and handed the work to the picture restorer Charles Edward Clifford, judging by the label formerly on the back of the frame (see ‘Inscriptions’). [14]

When Samuel Smiles died on 16 April 1904 the portrait was hanging at 8 Pembroke Gardens. Within a week John Hartree, spokesman for the Smiles beneficiaries, began negotiations to present it to the National Portrait Gallery: ‘I am endeavouring to obtain permission from those interested under the will of my grandfather (the late Dr. Smiles) to present to the Nat. Portrait Gallery his portrait painted some years ago (about 20 I think) by Sir George Reid, it is life sized – head & shoulders & is I believe a good example of Sir G. Reid’s work, & a good likeness.’[15] The director Lionel Cust initially invoked the Ten-Year Rule. But on 13 May he wrote to say the Trustees were actually ‘disposed to waive it … in favour of Dr. Smiles’, subject to seeing the painting at their meeting on 28 July. The portrait, which was presented in a Watts-style frame, was duly accepted and entered the Collection three months after Smiles’s death.

The portrait became widely known through the photogravure by Emery Walker, published in Smiles’s Autobiography in 1905. Paul Rajon (whom Reid admired as ‘one of the best etchers living’) [16] made an etching based on the 1876 portrait, and there is a twenty-first-century copy of NPG 1377 by a descendent, J. Michael Smiles: see ‘All known portraits, Paintings, drawings, sculptures and prints 1876’.

Given by members of the sitter's family, July 1904.

David Livingstone and the Victorian Encounter with Africa, NPG, London, 1996 (3.9).