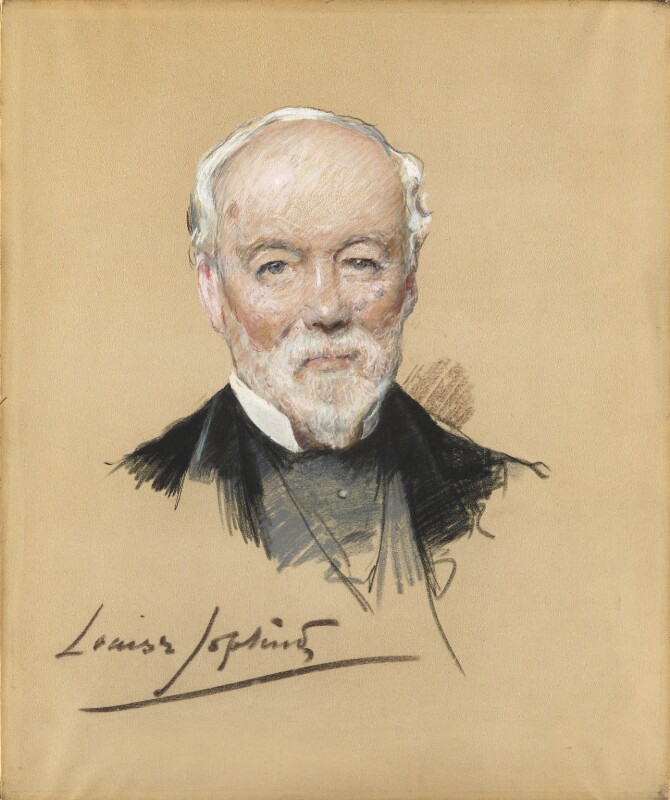 There are no references to Samuel Smiles as a friend or sitter in Louise Jopling’s lively, gossipy memoirs, Twenty Years of My Life, 1867 to 1887. Nor does Smiles’s Autobiography, which closes in 1890, mention his acquaintanceship with Mrs Jopling. They did, however, became next-door neighbours in his extreme old age, when she moved to Pembroke Gardens in 1902.

The pastel drawing NPG 1856 is signed by the artist but not dated. Fortunately a list of the pictures executed between 1868 and 1887 is included in her memoirs and it establishes the portrait was drawn in 1887. [1]

In the 1880s Louise Jopling was at the height of her powers. As well as showing at the Grosvenor Gallery and the Royal Academy, she regularly sent exhibits to the Society of Women Artists. In 1905, a year after his death, she entered a portrait of Samuel Smiles to the SWA, priced at £37.00. [2] There is no evidence of other Jopling portraits of Smiles so references to this work, and to one shown at the Royal Society of Portrait Painters in 1893, do in fact relate to NPG 1856 (see ‘Exhibitions’).

Apparently the portrait did not sell for it was still in the artist’s possession in 1919. At this date a friend, Mrs Amy Savage, drew the attention of the National Portrait Gallery Director, James Donald Milner, to this ‘very clever pastel’.[3] A few weeks later she wrote again: ‘It is a small pastel of Smiles & if the frame is a bit too important for the head & shoulders I’m sure Mrs Jopling will so value the inclusion in the nation’s catalogue of her name as to make no difficulty here.’ [4]

The drawing was shown to the NPG Trustees at their meeting in February 1920, after a touch of restoration. Mrs Jopling wrote to the director: ‘May I have an opportunity of seeing the pastel of Dr Samuel Smiles? As far as my recollection of it goes, the marks must be accidental and I could easily remedy them.’[5] Contrary to Amy Savage’s description of the pastel as ‘small’ it is a lifesize head and shoulders, confidently handled, with touches of brilliant blue and pink to lift the monochrome scheme. The imposing gilt Watts-style frame suggests that satisfaction and value were attached to the portrait.

‘Jopling produced many portraits of intelligent and fashionable women […] and worked extensively in pastel; one of her few drawings of men is a portrait of the biographer Samuel Smiles (NPG).’ [6] To date this is her only work at the NPG. For Sir John Everett Millais’s fine oil of Louise Jopling herself, painted in 1879, see NPG 6612.