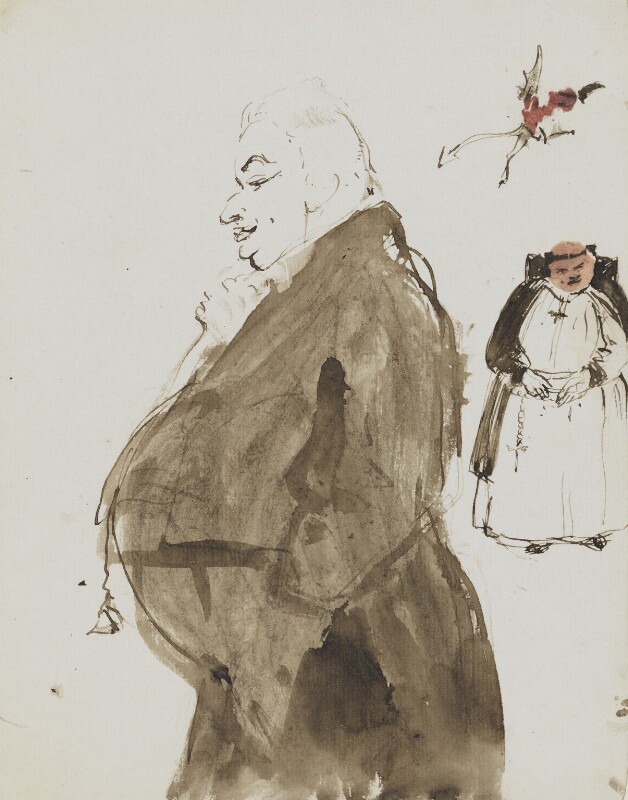 The drawing bears a close resemblance to the slightly more formidable profile done at about the same time (see NPG 2887). Landseer delighted in making satirical drawings of the Smith of Smiths. One from the same album as NPG 4917 shows him standing in front of a fireplace (? at Holland House), head sunk deep in shoulders, perhaps submerged in one of those depressions of which he wrote in a famous letter to Lady Georgiana Morpeth, 16 February 1820.
Landseer evidently agreed with Macaulay's description, '... the queer contrast between his black coat and his snow-white head, and the equally curious contrast between the clerical amplitude of his person and the most unclerical wit, whim and petulance of his eye ...' (Macaulay to his father 21 July 1826).
Two other drawings are at Baron's Court (Duke of Abercorn) – whole-length standing, and whole-length standing before a fire, exhibited 'Sir Edwin Landseer', RA ,1961 (118); two others are in the British Museum Red Redleaf Scrapbook - side view in glasses (p 5) and three-quarter-length with Newfoundland dog (p 38a).
Smith's famous bon mot, 'Is thy servant a dog that he should do this thing?', made when told of Landseer's wish to paint his portrait, probably actually originated with J. G. Lockhart.

Three-quarter-length in profile to left with cynical smile and prominent paunch, allegorical emblems of Good and Evil (or Church and State) in background, a corpulent priest with tonsure and pink head (in watercolour) and above him a winged devil with blotch of red watercolour.