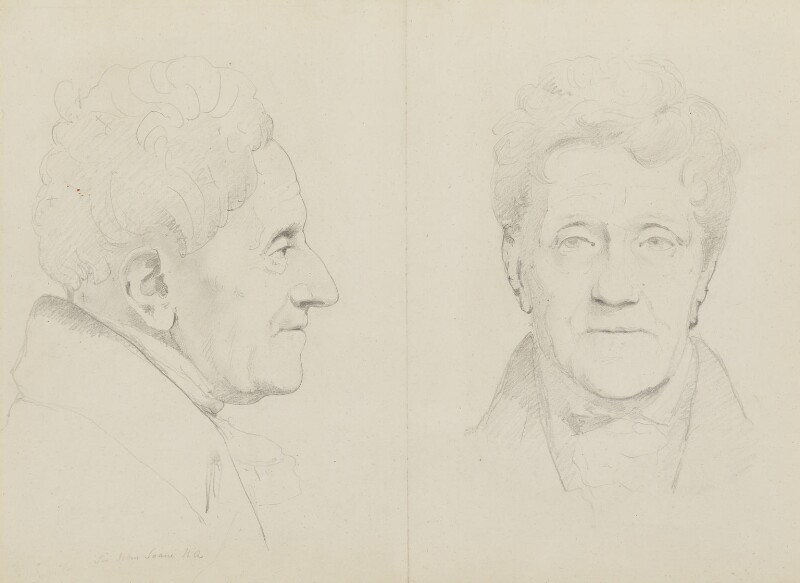 The bust now in the Soane Museum, originated with a letter from Chantrey to Soane dated 15 May 1827: 'My Dear Sir, Will you come to me on Thursday morning and bring your Head with you? Breakfast will be ready at 9 o'Clock, but if you do not appear at that time I will expect you at Eleven, unless I hear to the contrary. You may chuse Friday if it suits you better' (Arthur T. Bolton, The Portrait of Sir John Soane RA, 1927, p 453). It seems to have formed some sort of exchange for architectural work on the ante-room to Chantrey's sculpture gallery in Belgrave Square and was finished in April 1829: '... after repeated efforts, attended with various success, I have at last persuaded myself that my labours are brought to a successful termination, but whether the bust which I have made shall be considered like John Soane or Julius Caesar is a point that cannot be determined by either you or me ...' (Arthur T. Bolton, The Portrait of Sir John Soane RA, 1927, p 453 and see Alex Potts in Clyde Binfield's Sir Francis Chantrey: Sculptor to an Age, 1981, pp 64-7). It was exhibited RA 1830 (1241) and presented to Soane in October, incised: John Soane Esqr RA/Presented as a token of respect/by Francis Chantrey Sculptor/1830. The plaster model is Ashmolean Museum (634-122). Francis Chantrey’s Ledgers of Accounts record on page 22: 'Bust of John Soane Esq. 1829 March (blank) Oct 30 1830 Finished and presented to John Soane Esq as a mark of esteem by Francis Chantrey FC'. Although the drawing is inscribed Sir John Soane RA he was not actually knighted by William IV until 1831.
A mezzotint by Charles Turner was published 18 January 1830. Medals from the Chantrey profile were made by W. Wyon 1834 and W. Bain 1837.

Profile to right and full-face, both marked lightly with guide crosses.