1 of 2 portraits of Reginald Southey 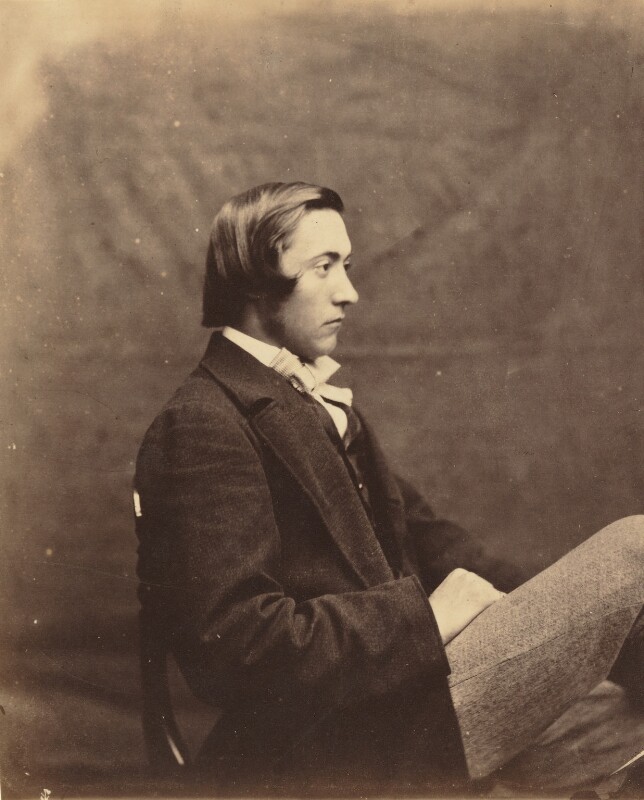 Reginald Southey and Charles Lutwidge Dodgson (Lewis Carroll) were near-contemporaries who met in the early 1850s at Christ Church Oxford, where from 1855 Dodgson was a tutor in mathematics and Southey studied natural science, graduating with a BSc in 1855 and an MSc in 1857. Southey, who took up photography around 1853, possibly through Hugh Welch Diamond, first secretary of the London Photographic Society, is now credited with having materially assisted Dodgson’s first steps in photography; he was also present at Dodgson’s first meeting with Alice Liddell.

Their shared interest in photography is intermittently chronicled in Dodgson’s extant diaries. [1] On 1 March 1855 he went to look at the images Southey had produced, noting ‘one very successful of the Broad Walk from his window – about the best amateur attempt that I have seen’. [2] The following January both men called on Diamond, who had photographed Dodgson’s uncle, and on 18 March 1856 they visited the photographic supplier Ottewille in London, where Dodgson ordered his first camera. Before it was delivered to Oxford, they collaborated on efforts to take photographs from the garden of the college deanery, the Liddells’ home, which all failed owing to the age of the chemicals used; on the first occasion, Dodgson recorded that ‘the three little girls [Lorina, Alice and Edith Liddell] were in the garden most of the time; and we became excellent friends. We tried to group them in the foreground of the picture [of Christ Church Cathedral] but they were not patient sitters.’ [3] This was Dodgson’s first meeting with Alice, shortly before her fourth birthday.

On 1 May, the day Dodgson’s camera arrived, he made his first solo attempts, using Southey’s ‘spoiled’ collodium, and a week later, using new supplies, they joined forces again: ‘I spent the afternoon with Southey, photographing: he and I each took a portrait of [John Martyn] Collyns and, after several failures, he [Southey] succeeded with my help in getting a good one of himself’ [4] (see ‘All known portraits, Photographs, Self-portrait, 1856’).

Two days later Dodgson watched as Southey photographed Dodgson himself and other colleagues, ‘Faussett, Hewitt, Harrington’, and recorded that then, ‘as it was so good a day for it, I went over to the Library and called to Harry Liddell from the window and got him to come over to Southey’s room. We had great difficulty in getting him to sit still long enough: he succeeded at last, by placing him in a bright light, in getting a fair profile.’ [5]

By showing an album of Southey’s prints to the Liddell parents, Dodgson obtained their permission to photograph Harry again, and on the same day he noted that ‘Southey spent a long time making up developing fluid for me so that I am now ready to begin the art’. [6] On 3 June 1856 he spent the morning at the deanery ‘photographing the children’, [7] apparently without Southey.

During the summer vacation that followed Dodgson practised his new craft with mixed results, and when he returned to Oxford in October he met up again with Southey, who advised him that Henry Acland, later regius professor of medicine, had ‘a beautiful family’ of six children, whom he might photograph. In spring 1857 Southey visited the Isle of Wight, where he took photographs of the sons of both Julia Margaret Cameron and Alfred Tennyson, later presenting a print of the Tennyson boys to Dodgson.

In Oxford the two men collaborated on taking ‘anatomical’ pictures of specimens in the Anatomy Department, culminating in an elaborately posed image of Southey standing alongside the suspended skeletons of a man and a monkey (see ‘All known portraits, Photographs, By others, 1857’). They also collaborated on further photographs of the Liddell daughters, [8] and a month later Dodgson called on Southey in London to seek ‘his opinion on the negatives’ [9].

In the autumn, before Southey began medical training in London, the two men spoke of ‘taking a photographic tour together next summer’. [10] They met again in December, when Southey invited Dodgson to join him in the operating theatre at St Bartholomew’s Hospital to observe a surgeon amputate a lower leg, with the assistance of chloroform. The following day Dodgson called at Southey’s home to see his new photographs, leaving some of his own for delivery to the Photographic Society of London’s forthcoming annual exhibition.

The present image is no. 219 in Taylor and Wakeling’s catalogue of Dodgson’s photographs. [11] An oval vignette print is in the Cotsen Album, Princeton University Library, where it is mistakenly annotated ‘Regd Southey – 1856’. Two further prints are in Christ Church Library. [12] The image is notable for the sitter’s natural stillness, as if lost in thought rather than posing stiffly, and for the pictorial focus on Southey’s features, delineated with simplicity and clarity. The photographic exposure is near perfect on both light and darker areas, showing with especial success the sheen on the sitter’s hair and the differing textures of his clothing.

As Dodgson’s diaries for 1860 do not survive, there is at present no documentary account of the sitting. Its date is deduced from Dodgson’s careful and chronological numbering of his images, of which this is IN-0519. By June 1860 another 50 images had been taken, suggesting that 0519 dates from two or three months earlier. It is assumed that in 1859–61 Southey divided his medical training between London and Oxford, where he received his university MA in June 1860 and his MD degree in 1861.

Although Southey’s hairstyle is the same as in his 1856 photograph, he is differently dressed, now wearing a large, loose-knotted white evening tie, with dark jacket and lighter-coloured trousers. The image can be compared with an undated three-quarter-length portrait of Dodgson shown in profile to left, seated on an upright chair, where the framing and focal length are similar (see NPG P39). However, the curtain draped behind Southey also resembles that seen in several of Dodgson’s 1857 photographs, including those of Thomas Vere Bayne (NPG P7(18), where the neckwear is similar), William Jacobson (NPG P7(1)), Edward Stokes (NPG P7(6)) and George Marshall (NPG P7(8)). With NPG P7(23) these photographs were all included in an album depicting mainly college colleagues taken by Dodgson at Christ Church, which originally belonged to another of the sitters, Rev. John Rich (see NPG P7(11)), by whose great-niece it was offered to the Gallery in 1973.