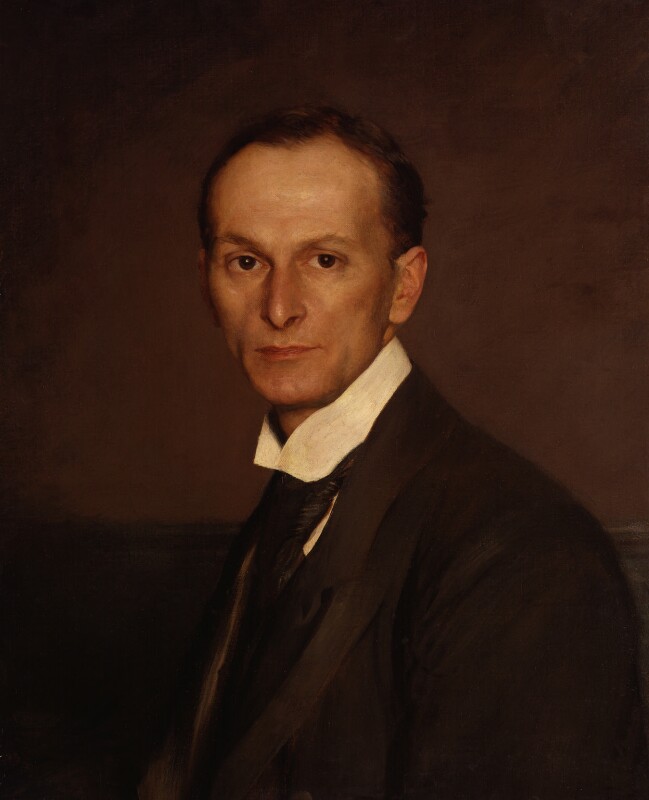 This is the prime image of Marion Harry Spielmann, and the main portrait in oils in the iconography. It was painted in 1904, the year the Magazine of Art, of which he was for seventeen years the editor, ceased circulation. NPG 4352 is in fact only a part of the original portrait that was exhibited at the Royal Academy in 1904 (473). The original is known through contemporary reproductions. [1] It was a large whole-length showing Spielmann in his study, seated at an upright desk with bulging portfolios in the foreground. His son the donor thought it ‘a full-length of awkward pose’. At some time between 1904 and 1949, when it was first offered to the National Portrait Gallery, the portrait was cut down on all sides to make into a bust-length picture. [2]

John Henry Frederick Bacon moved from painting predominantly genre scenes towards producing more portraiture in the early 1900s. He worked on several large ceremonial pieces and was elected ARA in 1903. Why Spielmann, with his intimate knowledge of the contemporary art scene, agreed to be painted by Bacon, and on such an impressive scale, is not known. [3] There were pastel portraits of Spielmann at Bacon’s studio sale in 1914. [4] And Spielmann also owned a Bacon chalk self-portrait. [5] Perhaps they were old friends; the portrait effectively captures Spielmann’s penetrating gaze and his dress, with a loose-fitting jacket, extra-high shirt collar and loosely knotted tie.

The painter H.J. Thaddeus described Spielmann’s appearance in 1887, the year he assumed the editorship of the Magazine of Art: ‘He had already established his reputation as perhaps the brightest and most accomplished art critic in London. Youthful and frail in appearance, his pallid countenance was illuminated by the most remarkable eyes, black and lustrous, that I have ever seen. They literally danced with life, alertness and intelligence, riveting your attention with a mesmeric attraction.’ [6]

The portrait was bequeathed by Spielmann’s only son, Dr Percy Edwin Spielmann (1881–1964, petrochemist) to ‘supplement’ the portrait by J.H. Amschewitz (see NPG 3047), which he felt did not do his father justice.

The sitter; by descent to his son, Dr Percy Edwin Spielmann, who bequeathed the portrait to the NPG, 1964.