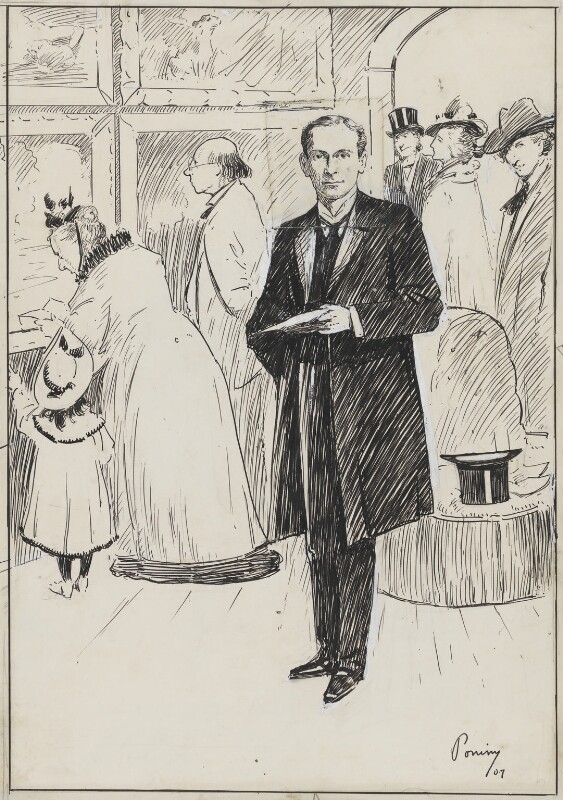 In the late 1930s, in his eighties but still very alert, M.H. Spielmann invited the director of the National Portrait Gallery to view his collection and make a selection for immediate presentation. Henry Hake drew up a wish-list of twenty-five portraits, including several remarkable eighteenth- and nineteenth-century artist self-portraits (see NPG 3023 to NPG 3047). At the end of the list he added a portrait of the benefactor himself by John Henry Amschewitz, NPG 3047.

Spielmann was delighted but also peeved that Hake had not chosen a finer image:

I am immensely flattered that you should include me in the list. But could you not take another likeness of me rather than that rough pen drawing by Amshewitz, which was published by the newspaper for which it was drawn? I should be adjudged, no doubt, unworthy of a painting (even a small one) but one or two are really fine works of art, which would be interesting for their painters’ authorship. [1]

Hake did not mince his words: ‘I included that particular likeness of yourself because it showed you engaged in the activity through which you became known. That, to me, is its interest as an historic document.’ [2]

I wrote to ask whether the entry in your list as to a portrait of me by Amschewitz was a slip or really an error. Amschewitz never drew me (that I can recall) – but there is a portrait of himself not acknowledged in your list. Is not this it? I should like the matter settled because if there is an error I have certain portraits of myself by excellent artists one of which I think you would be glad to have as a genuine likeness, & an excellent work. Otherwise I feel that I may lose the honour of being on the NPG list of accepted portraits – or may be turned out altogether!! [3]

The director stood his ground, and Spielmann was represented only by the drawing until 1964, when the bequest of NPG 4352 set the record straight from the family’s point of view.

The drawing shows Spielmann viewing an exhibition surrounded by visitors including the artist himself (extreme right) and the financier Henry Rensburg. [4] It was made in 1907, the year John Henry Amschewitz left the Royal Academy Schools. [5] Spielmann denied it was ever done from life. Certainly the head and shoulders are drawn on a separate (but matching) square of paper (69 x 62mm) which has been stuck onto the main drawing. Inscriptions on the back and a note and a cutting in NPG RP 3047 indicate it was produced for publication in the newspaper the Jewish World in 1907 (captioned ‘Mr Marion H. Spielmann, F.S.A.’). [6] The pose does not relate to any known photograph.

Part of the Spielmann Gift, accepted 1939.