4 of 33 portraits of Sir Richard Steele 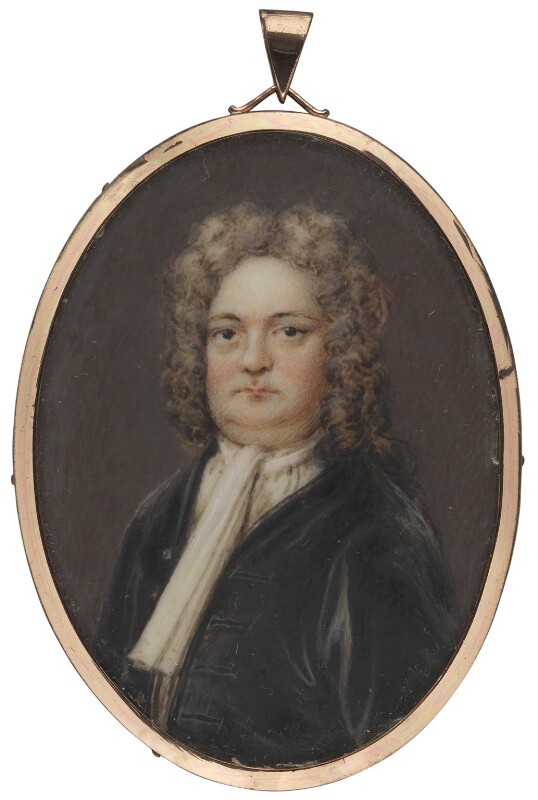 One of a set of four miniatures of Richard Steele and apparently of his three children, originally mounted together within an oval frame; [1] they were framed separately by 1910. On the back of the oval frame the sitters were identified, in script probably dating from before 1782, as Richard Steel, Miss Mary Steel, Eugene Steel and Lady Steel [2] (but probably Elizabeth Steele, see NPG 1506b). Though they are the same size and were framed together in the 18th-century, there is some difference in quality (Mary NPG 1506d seems better than the others; Elizabeth NPG 1506b and Eugene NPG 1506c seem to be by the same hand); all were previously attributed to Christian Richter. [3]
Assuming they were painted at the same time, a date between 1720 and 1723, when Eugene died, seems indicated by the childrens’ ages.

1) Illus. G. W. Aitken, Life of Richard Steele, 1889, II, f.p.294.
2) The label is now separately conserved; it reads as follows:
Sir Richard Steel Knight
Author of the Spectators, Tatlers
Guardians, and Several Political writings
Father of Elizabeth Lady Trevor of Bromham
House [NPG 1506a]
Miss Mary Steel [NPG 1506d] Eugene Steel [NPG 1506c]
Lady Steel
Daughter of Jonathan Scarlock Esqr
of White House, Llangunnor
Carmarthenshire [NPG 1506b]
In the centre, in a different hand after 1783 (Lady Trevor being described in the past tense), is written:
Lady Trevor was
third cousin to the
late Revd Dr Scurlock M A
of Lovehill House Bucks
and Blaencorse Carmarthens
S Wales
3) See References. An attribution to Richter was repeated in NPG catalogues from 1931 to 1963 (but in 1914 they had been described as ‘possibly by Bernard Lens’). The attribution to Richter was finally dismissed in 1975 by V. J. Murrell in his examination reports on file.