1 of 16 portraits of Laurence Sterne 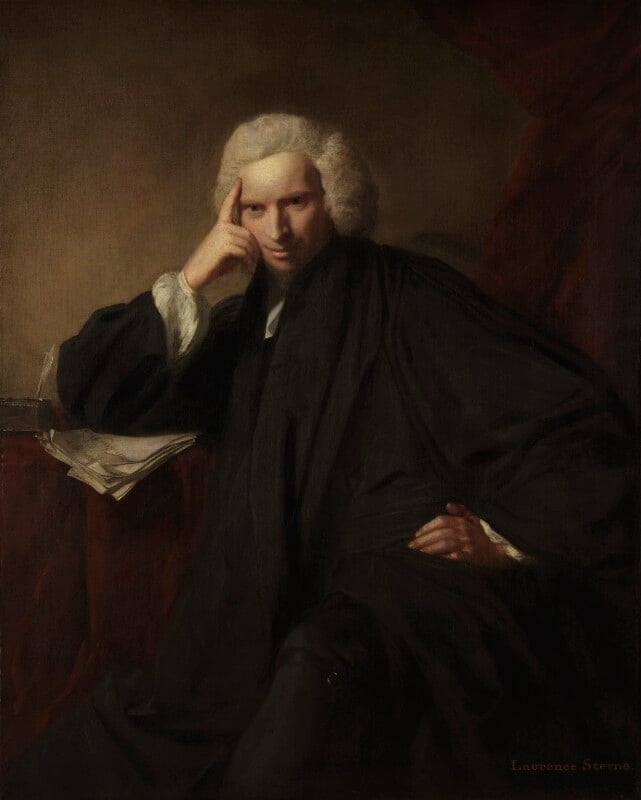 Signed and dated on a paper inserted into the sheaf: J Reynolds/pinxt/1760; inscribed in yellow, bottom right, Laurence Sterne.
On the back of the stretcher are the labels of the following exhibitions: Second Exhibition of National Portraits, South Kensington, 1867; Grosvenor Galleries 1889; Royal House of Guelph, New Gallery, 1891; RA 1934, 1968/9.

Sterne sat to Reynolds on the 20, 25, 29 March, 3 and 6 April, 1760. Other entries occur in the 'sitter-books' on 11 June 1764, and in 1768, on 23 February and 1 March. By early March, Sterne was so ill he was confined to bed; he died on 18 March. The only autograph version known is NPG 5019. Nothing else approaches it in quality. A 30 x 25 with the papers inscribed [S]entimental Journey instead of Tristram Shandy was in the Asher Wertheimer sale, Christie's, 18 June 1920, lot 48. According to the sale catalogue this was the portrait lent by Mrs Whatman to the Guelph exhibition 1891 (305) where it was stated to have been given by the sitter to Edward Stanley [1] who bequeathed it to his son-in-law, James Whatman of Vinters (sic) near Maidstone. The inscription, if coeval with the paint, would place the work not earlier than c.1768. The handling suggests an early copy rather than the studio. No connection between Sterne and Stanley has been substantiated.
A number of copies exist, including one now in Canada attributed to Northcote lent to the 'Portraits of Yorkshire Worthies' exhibition, Leeds 1868 (3179). Others are at the City Art Gallery, York [2]; Jesus College, Cambridge; in a British private collection, and a weak example bought at the Earl of Lonsdale's sale, 1887, is in the National Gallery, Dublin. A miniature reproduced by Curtis when in the collection of S. J. Pegg, c.1934, appears to be a derivative of the Reynolds, perhaps, on stylistic considerations, painted c.1800. [3] An enamel copy by Bone was made in 1814, his preparatory squared drawing being in his sketchbooks in the NPG library.
NPG 5019 was probably finished in the spring of 1760. Gray's letter to Wharton, 22 April 1760, refers to the portrait 'done by Reynolds, and now engraving'. [4] The engraving is likely to be the undated mezzotint by Fisher; the first dated engraving is that by Ravenet, published as the frontispiece to the Sermons that May.
Conflicting accounts of the origin of NPG 5019 occur. It is not known to have been a commissioned work. There are no payments for a portrait of Sterne in Reynolds' ledgers, only for engravings. Leslie & Taylor's statement that it was painted for the Earl of Upper Ossory seems improbable. By 1801 he is the first recorded owner (see Provenance). Later in life, he was certainly a friend of Reynolds who bequeathed him the choice of a picture. [5] He bought two portraits and three subject pictures in the 1796 sale. [6] But no connection with Reynolds is known before Ossory sat to him in 1767. Ossory was not quite sixteen when NPG 5019 was painted. Equally the belief that it was painted for the sitter has not been established; the letter attributed to Sterne, [7] stating that it was given him by the artist, is now regarded as another of the forgeries of William Combe (1741-1823). Little information is available about the early movements of the portrait. Reynolds would presumably have himself sent it to the two Society of Artists' exhibitions in 1761 and 1768, while Bath's letter to Mrs Montagu (see Bath, NPG 337) suggests that it was in his studio at the end of 1761. The sitter's absence abroad, illness and death could well have prevented delivery, if the portrait was destined for him. It is doubtful whether Sterne would have been sufficiently solvent to pay for such a portrait though a similar consideration did not prevent Reynolds painting Boswell.
The question can only remain open, but the known facts do not prevent the hypothesis that Reynolds might well have painted it as a speculation and may have been prepared to take a financial risk with an eye to publicity. 'Half length of Dr. Sterne' was after all the first portrait he exhibited under the sitter's name; [8] the next was the famous Garrick between Tragedy and Comedy 1762 - and Sterne in 1760 with the first two volumes of Tristram out, was the literary lion of the moment.

Good, though generally now a little thin; a small passage out of key in the centre of the wig (due to loss of varnish?); the picture was received too late for a thorough technical examination.

Bought, 1975, from Lady Mersey, through Messrs Agnew with the aid of an anonymous benefactor, grants from the National Art-Collections Fund, the Pilgrim Trust, HM Government, and the result of a public appeal. The portrait seems first to be mentioned at Ampthill in the collection of John, 2nd Earl of Upper Ossory in 1801; [1] the date and source of its acquisition is evidently not available, but it was probably not before 1782 when Pennant mentions other pictures in the house, but not the Sterne. [2] Ossory died in 1823 and Ampthill passed to his nephew the 3rd Baron Holland. [3] NPG 5019 was bought from his widow in 1840 by the 3rd Marquess of Lansdowne, [4] thence by descent.