3 of 16 portraits of Laurence Sterne 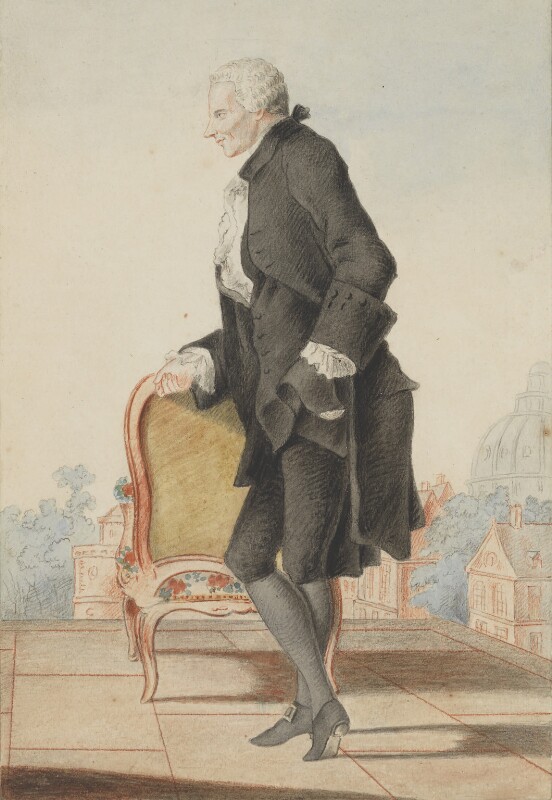 The architecture has not been identified. Although at first sight it would appear to suggest mediaeval and seventeenth-century buildings in Paris, no connection with specific buildings can be established. If Paris is intended, the Sorbonne which Sterne visited would be appropriate, but the artist may have meant a fanciful, inaccurate reference to London - St Paul's or the Tower. [1]
Louis Carrogis, who styled himself Louis de Carmontelle, was the son of a maître cordonnier who kept a shop in Paris. By 1762 he was in the household of Louis Philippe duc d'Orléans (1725-85) and was reader to his son Louis Philippe Joseph, duc de Chartres. Born in 1747, the latter (Philippe 'Egalité') succeeded his father as duc d'Orléans in 1785, and was executed by the Revolutionaries in 1793. Carmontelle, author of the Proverbes dramatiques, was a water colourist of considerable ability, and produced, from 1757, some hundreds of small whole length portraits of the Orleans circle. Grimm writes on 1 May 1763 that for several years Carmontelle had been making a collection of chalk and wash drawings, which he took with astonishing facility in two hours. [2] He adds that the collection grew day by day.
Though his work varies widely in quality, at his best Carmontelle could hold his own with his professional compatriots, and, as Grimm remarked, had an unusual knack for catching likeness. [3] The British Museum acquired from Colnaghi’s in 1904, four fine drawings, including Mde de Vermenoux. [4] Less satisfactory, and probably a repetition - several versions are known - is the child Mozart, with his father and sister, on loan there from the National Gallery. [5] Though more has yet to be learned of Carmontelle, NPG 2785 appears to be of about the same quality and dimensions as the Sterne at Chantilly (below), though not as well preserved. It would be rash to exclude either from his oeuvre.
Sterne certainly sat. He wrote to David Garrick from Paris, 19 March 1762: ‘The Duke of Orleans has suffered my portrait to be added to the number of some odd men in his collection; and a gentleman who lives with him has taken it most expressively, at full length - I purpose to obtain an etching of it, and to send it you ...’ [6] No contemporary etching of the Sterne is known, it not being among the twenty-seven subjects by Carmontelle that were engraved. [7]
It appears that Foley, his banker in Paris, had a portrait of which he was trying to obtain a copy. On 5 October 1763 Sterne wrote to Foley from Montpellier: 'I believe I shall beg leave to get a copy of my own [picture] from yours, when I come in propria persona' and again, writing from York, 11 November 1764, he asks, 'is it possible for you to get me over a Copy of my picture anyhow? - If so I would write to Mlle Navarre to make as good a Copy from it as She possibly could - with a view to do her Service here - & I wd remit her 5 Louis - I really believe, twil be the parent of a dozen portraits to her - if she executes it with the spirit of the Original in yr hands - for it will be seen by half London - and as my Phyz - is as remarkable as myself - if she preserves the [Spirit] Character of both, 'twil do her honour & service too'. [8] Curtis thought Navarre might be a mis-spelling and that she could be a daughter or sister of Jean-Georges Noverre (1727-1810), maître de ballet, inventor of the ballet pantomime and a favourite at the court of Frederick of Prussia. [9] Cash, however, who connects the reference on no very conclusive evidence with NPG 2022, suggests more convincingly Mlle Geneviève Navarre (fl. 1761-76), [10] a pastel painter and miniaturist residing in the Rue Beaurepaire, Paris. [11] Mlle Navarre is not one of those known to have engraved after Carmontelle and does not seem to be recorded as an engraver. An engraving might best fit the context of the correspondence. Neither Foley's portrait, nor the copy, if made, has ever been identified, and the question remains open. Foley is not known to have been of Orleans' circle. All that can be said in favour of identifying Foley's portrait as a Carmontelle, is that it was in France and the small sum of 5 Louis [12] would be appropriate for a minor work like a drawing or engraving, but not for an oil. On the other hand Carmontelle is not likely to have had a studio and would probably have been responsible for his own repetitions.
Two versions are at present known, NPG 2785 and an almost identical one acquired by the younger Orleans' grandson, the duc d'Aumale, for Chantilly. [13] The bulk of Carmontelle's drawings did not pass to the younger Orleans, who was guillotined in 1793, but remained with the artist. As Davies points out, Carmontelle kept nearly all of them, [14] only occasionally giving one away, though some were said to have been sold at the time of the Revolution. The 750 drawings in his posthumous sale, Paris, 17 April 1807 [15] were bought by Richard Lédans. His 1807 inventory at Chantilly does not include Sterne.
The Chantilly version was purchased from the Edward Cheney sale, Sotheby's, 29 April 1885, lot 293. This was probably from the collection of La Mésangère, the publisher of the Journal des Dames, since the mount [16] is of the type he used to remount the surviving bloc of Carmontelle's drawings, which he owned 1816-31. These he had bought from Lédans. [17] However, since there is no Sterne in the 1807 inventory, it is not known whether Lédans obtained it later, or whether La Mésangère acquired it from another source.

High forehead, sharp nose, sunken cheek, rather pale complexion, white wig; black coat with matching waistcoat and breeches, grey stockings and buckled shoes; standing on a roof(?) terrace, leaning on the back of a chair; pink houses, blue trees and a large cupola and a mediaeval(?) tower in the near background, blue sky shading to white beyond; strong shadows cast from the left.

Bought 1935, from Paul Wallraf, Paris; from the collection of H. E. Powell, and at some time with Colnaghi’s; early history unknown.