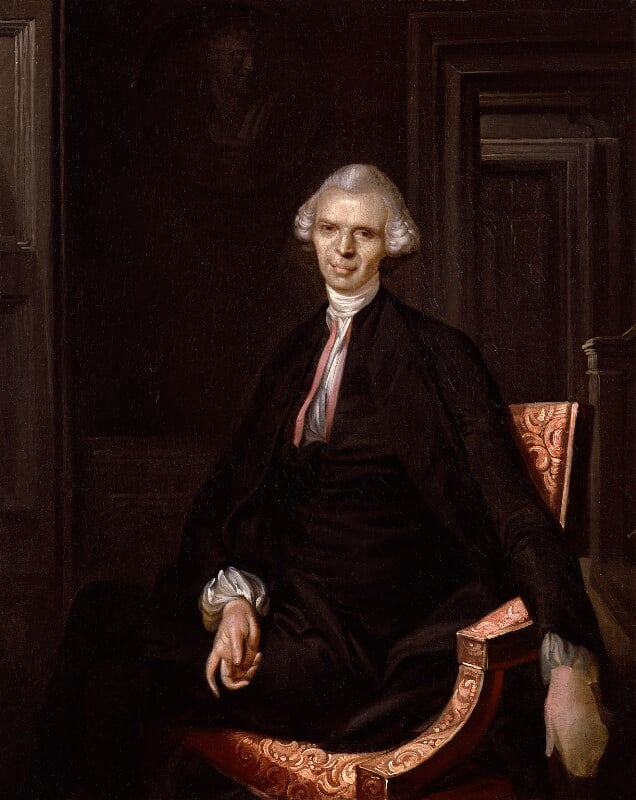 Identification rests on comparison with authentic likenesses and is strengthened by the allusion to Rabelais. This also suggests an approximate terminus, the appearance of the first volume of Tristram Shandy in 1760 leading Warburton to compare the two authors. [1] The painter is not known but the hand, like the interior, appears to be English. The chair too, despite the unusual feature of material on the arm-rest supports, is surely English - or just possibly American colonial. [2] The portrait was painted presumably late in life when, after years of ill health, Sterne had become permanently weakened by haemorrhages of the lungs. The perspective of the background is well drawn but the figure is out of proportion and suggests an artist who did not normally paint portraits. A unique mezzotint in the Berg collection, New York Public Library, on paper probably made by 1780, [3] bears neither the artist's nor the engraver's name.

Rather thin particularly around the jaw and in two small losses above the knee where green ground(?) shows through; pin holes at corners.

Bought, 1924, from A. Morrison who believed it to be by Hogarth when he purchased it, with a reputed Constable, at a sale in the area of Swiss Cottage. [1]

1) Mr Morrison was unable to provide the auctioneer's name or other information, correspondence 1930, NPG archives.

A unique mezzotint in the Berg collection, New York Public Library (see above).