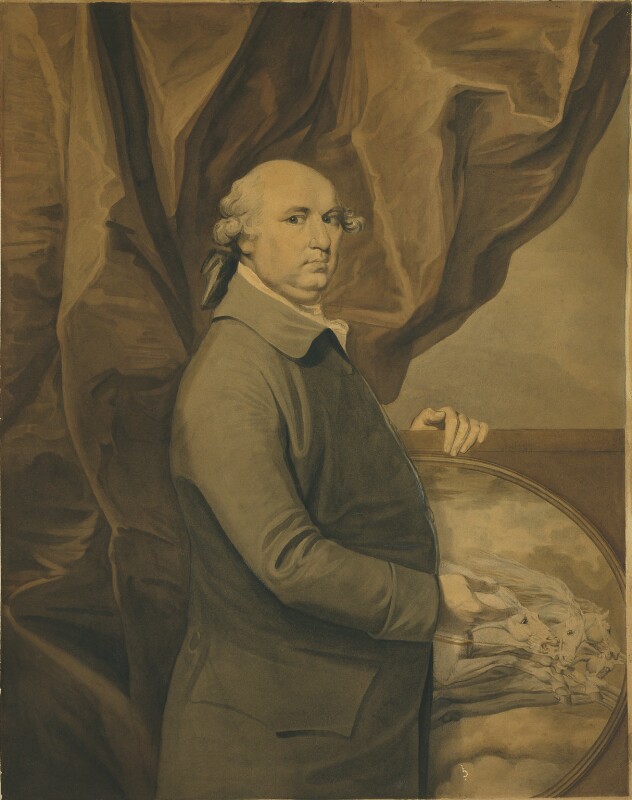 The head derives from a chalk study by Humphry dated 1777. [1] The composition was indifferently engraved (slightly reduced) by William Nicholls in 1809 [2] as Humphry pinx., ‘from a picture in the possession of Mrs Spencer’ - doubtless the ‘Three Quarter Length Oil Picture, being a Portrait of the late Mr George Stubbs, senior, painted by Humphry’, bequeathed by Stubbs’s companion Mary Spencer to a Mrs Mary Dean. [3] NPG 1399, hitherto attributed to Humphry, [4] would appear to be a copy of this lost portrait, made specifically for the Nicholls engraving; the execution is pedantic (and the card support suggests a working drawing). [5] A small oval half-length version by W. H. Craft, dated 1779, shows an almost identical head and may also derive from the lost Humphry portrait.
Stubbs is shown holding his Phaeton and the Chariot of the Sun, of which he kept an enamel painting on copper dated 1775 in his studio until his death [6] – although the Phaeton shown in NPG 1399 is clearly larger. [7] Stubbs evidently prized this subject which, although considered an ‘un-natural fiction’ by Wedgwood, was also produced as a Wedgwood plaque in 1783. [8]

1 ‘[It] came direct from Townley [sic] Stubbs to the Stamfords. They have also two very large enamels by Stubbs of a lion & Tiger fighting & A Horse & Lion fighting size about 24” by 18” oval (letter from [T?] Winter of Reigate, acting for Mrs Stamford, 28 February 1905; NPG archive); the Stamfords had ‘always believed it to be by Stubbs himself’ (idem., 3 April 1905).