2 of 4 portraits by Thomas Bardwell 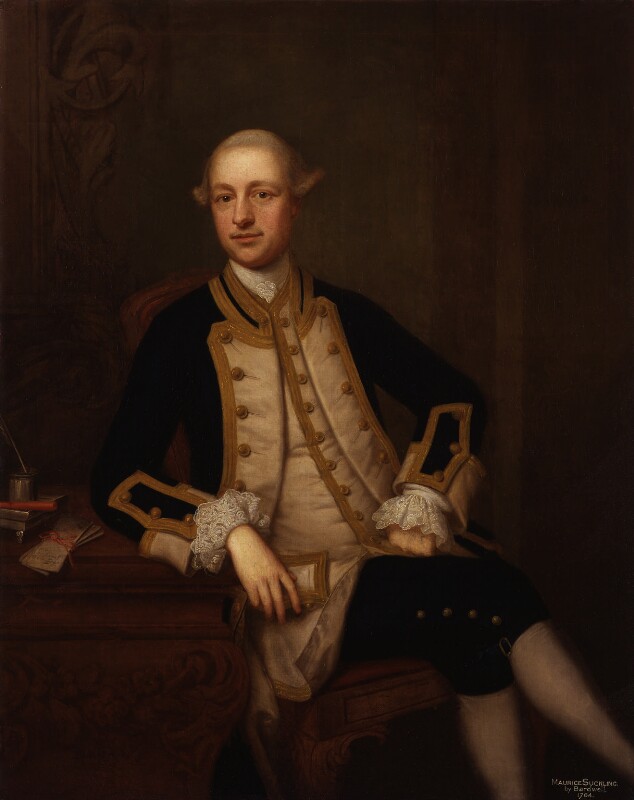 Bardwell painted several members of the Suckling family. [1] NPG 2010 was described in 1905 as showing Captain Suckling ‘seated in front of the portrait (also by Bardwell) of his cousin, young Robert Suckling, of Woodton, and ...probably executed at Woodton-hall a few months before that officer’s marriage with his cousin, the Hon. Mary Walpole’ [2] - which took place on 20 June 1764. Farrer in 1905 made no mention of Robert Suckling’s portrait being visible. [3] Was it identified just by the frame in the left background? NPG 2010 has been relined and no evidence survives of the canvas having been reduced; the position of Bardwell’s signature, bottom left, seems against it, and the figure of Suckling is far too small to fit a whole-length composition. [4] The other Suckling portraits by Bardwell were three-quarter lengths.
A modern half-length copy was acquired by the National Maritime Museum in 1948 (BHC 3045) [5] with unattributed portraits of Suckling’s parents.

1 Given by the sitter to his nephew, Horatio Nelson; his daughter Lady Charlotte (who married 1810 the 2nd Baron Bridport); their son, 1st Viscount Bridport, Cricket St Chard, from whom bought in June 1896 by Capt. T. Suckling RN (d. 1922), Barsham, Norfolk,2 and Highwood, Hants., bequeathed by him, subject to the life interest of his wife, and received 1924.