3 of 40 portraits by Charles Jervas 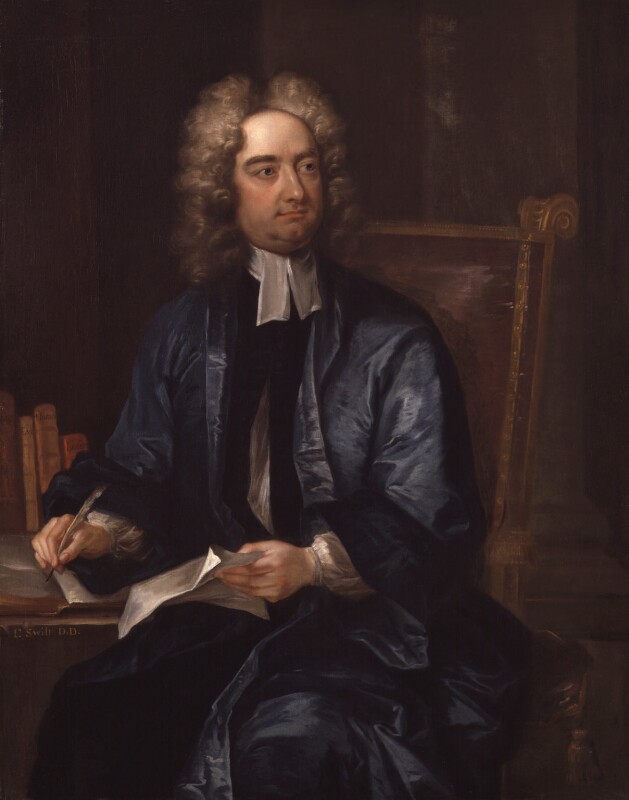 1 Fourdrinier’s engraving shows two additional slim volumes on the extreme left, one entitled Milton, and the open book complete; as a result ‘the figure is centred and the composition is balanced’ as Woolley observed (D. Woolley ed., The Correspondence of Jonathan Swift, II, p 592n2 where he also refers to an engraver’s proof of the unfinished plate in the ‘Bathurst volume’, Pierpont Morgan Library, New York). It is also possible that NPG 278 may have shown this slightly extended composition before lining in 1911.

The second Jervas portrait of Swift, painted in Ireland in 1718-19. Jervas was in Ireland from the summer of 1717 to September 1721, possibly returning briefly to London late in 1718. [1] Swift was in Ireland throughout that period. Compared with the earlier Jervas portrait (see NPG 4407), this presents a more engaging image (the head now leans a little towards his right shoulder, the eyes are wider, and the clerical bands are curled).
NPG 278 is now the only known three-quarter-length version as engraved by P. Fourdrinier, and it could therefore be the original portrait; the quality would support this. But the earlier history is not clear, and the Fourdrinier plate was described by Faulkner in 1768 as from a portrait then belonging to the Earl of Chesterfield, [2] probably the three-quarter-length of Swift by Jervas in the 2nd Earl of Oxford’s sale in 1742, [3] and now, reduced to a half-length, in the Sterling Library, London University (from Chesterfield House). [4]
The Oxford portrait was mentioned in letters from Jervas, Swift and the 2nd Earl of Oxford between 1723 and 1725. In 1723-24 Jervas told Lord Harley (as he then was) ‘When I gave orders to have the frame to our Dean’s picture put on, I recollected that the engraver is to be with me next week to endeavour to make something more like than that done by Mr Vertue for John Barber [see NPG 4407], besides it is a half length [now called a three-quarter-length], and the former is a simple busto [now called a half-length]’. [5] On 26 July 1725 Lord Oxford (as he had become) told Swift (from Dover Street, London), ‘I have the pleasure of seeing a picture which is very like you every day, and is as good a picture as ever Jarvis painted’; Swift answered (14 August 1725) ‘I hope the Picture of me in Your House is the same Mr Jervas drew in Ireland, and carryed over, because it is more like me by severall years than another he drew in London’; on 30 August Lord Oxford confirmed that his picture was ‘the same which Mr Jarvis drew of you in Ireland, and it is very like you, and is a very good picture’. [6]
Half-length versions include a studio version in the National Gallery of Ireland (177); [7] and a version formerly with Lord Bessborough, engraved as a half-length by A. Warren in 1821 (Bessborough sale, 2nd day, 11 July 1850, lot 178). Copies were sold Christie’s, 12 May 2005, lot 87 and presented to St Patrick’s Hospital, Dublin, in 1932. [8]
Two portraits of Swift (a kit-cat and a half-length) were in the Jervas sale, 11-20 March 1740, lots 23 and 80 respectively.

1 MS Inventory, Huntington Library, San Marino CA.
2 Graves told the Chairman of Trustees, W. Smith, ‘Swift was knock’d down to me at 50 gns but claimed afterwards by another person & it rose to 100 gns & I got it 50 gns less than I should have given myself’ (letter of 25 February 1869; NPG archive).