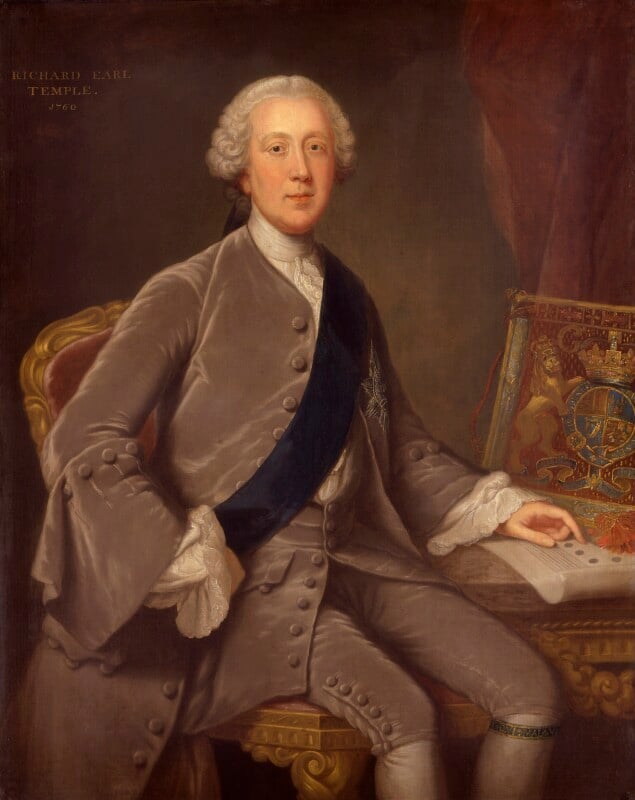 An unsophisticated portrait, in which the hands and purse are particularly slipshod. The inscribed date of 1760 is slightly misleading. The first state of Houston’s undated engraving omitted the Garter regalia and the purse (thereby revealing more of the architectural plan), the letterpress describing Temple as lord privy seal; the second state introduced the Garter regalia, while still omitting the purse; the title omitted lord privy seal (an office he resigned in 1761), substituting the lord lieutenancy of Buckingham, an office he held 1758-63. Watson’s undated print copied this second state, but omitted the Garter round the knee, the letterpress describing Temple as lord privy seal. These variations indicate Hoare’s original portrait was completed after June 1757 when Temple became privy seal and before February 1760 when he became a Knight of the Garter; the Garter regalia was then added. The Garter ribbon seen in NPG 258 hangs differently from that seen in the Houston and Watson prints. An identical version belonging to the Trustees of the Chevening Estate [1] clearly shows the Garter ribbon painted over the coat and may therefore be the original, in which case NPG 258 is a replica, presumably of 1760, as inscribed.

Blue eyes, white powdered wig, his hair tied with a blue ribbon, wearing a dove-grey velvet suit, with the blue ribbon of the Garter; seated on a red chair; with his left hand he points to an architectural plan1 on a table, with behind it, the purse of the lord privy seal; inscribed upper left: RICHARD EARL/TEMPLE./1760; a purple curtain to the right.