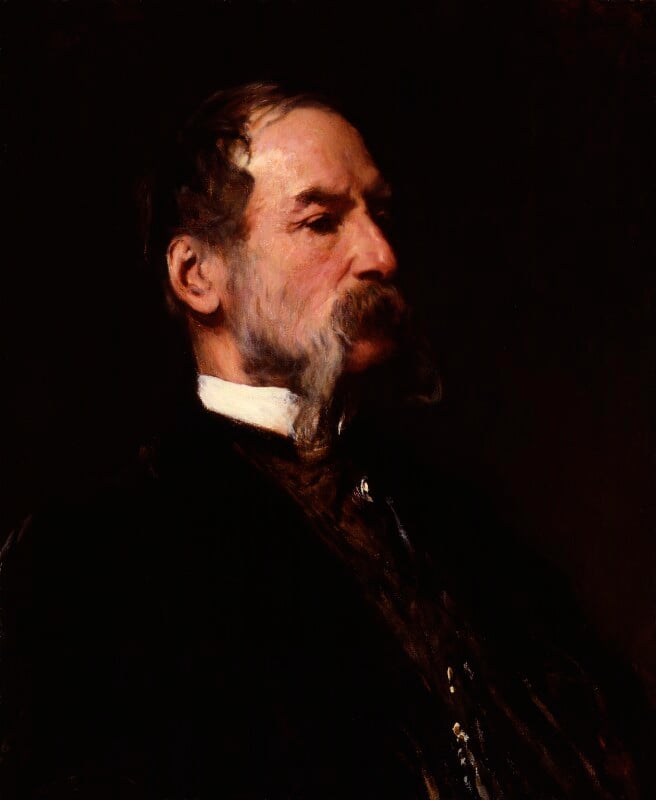 William Agnew and his brother Thomas Agnew were part-proprietors of Punch from 1870, and William Agnew became chairman of the magazine in 1890. He was a great admirer of Frank Holl's work, and sat to him for a portrait that was exhibited at the Royal Academy in 1883 and acquired by the National Portrait Gallery in 2015 (NPG 6991|mw245406). Also in 1883 Agnew commissioned a profile portrait of the chief cartoonist Tenniel, and this work, NPG 1596, was exhibited at the Grosvenor Gallery’s 1883 Summer Exhibition (89). The ‘double bill’ of Tenniel and Holl proved naturally attractive, and the portrait was lent to several exhibitions in the 1880s and 1890s, including the Chicago Exhibition in 1893. [1]

Holl’s portrait of Tenniel aroused interest from the first. The Art Journal (an art world insider evidently) judged it ‘very vigorous, but wanting in the sense of humour which twinkles in the eye and softens the mouth of the original’. [2] The Academy thought it the ‘most striking’ of the four Holls at the Grosvenor, [3] and the Magazine of Art agreed that it was the ‘best’, calling it ‘simple and vigorous’. [4] In a longish report on Holl’s 1883 Grosvenor Gallery portraits, in which it compared the artist to Frans Hals, the Athenaeum criticized Holl’s tendency to ‘coarseness’ and ‘roughness’, and his use of a palette that was ‘strong without richness’. It nevertheless allowed that the image of Tenniel was ‘charged with character, and therefore extremely welcome’. [5]

A recently found letter from Tenniel to Ernest G. Brown of the Leicester Galleries reveals that William Agnew in fact commissioned two portraits of the cartoonist in 1883: a full-face version as well as the profile NPG 1596. The full-face portrait was owned by William’s brother Thomas and was sold by his widow in June 1906, at which point it was acquired by the Leicester Galleries, London; it is presently untraced. [6]

Holl’s daughter A.M. Reynolds described William Agnew as one of her father’s ‘dearest friends and staunchest admirers’. [7] The connexion between Holl and Tenniel may have come through Agnew, although Tenniel and Frank’s father, Francis Holl sen., had performed in charity theatricals together years earlier in 1848, in aid of the Artists’ General Benevolent Institution. [8]

Sir William Agnew died in 1910. In his will he bequeathed the portrait of Tenniel by Holl to the Gallery and, exceptionally, it was accepted outright, in Tenniel’s lifetime.

As recorded in the Register of applications to copy portraits, NPG 77/5, a copyist or student, H. Allan, was given permission to copy NPG 1596 between 8 October and 21 December 1921.

The artist; Sir William Agnew, 1st Bt, who bequeathed it to the NPG; entered the Collection March 1911.