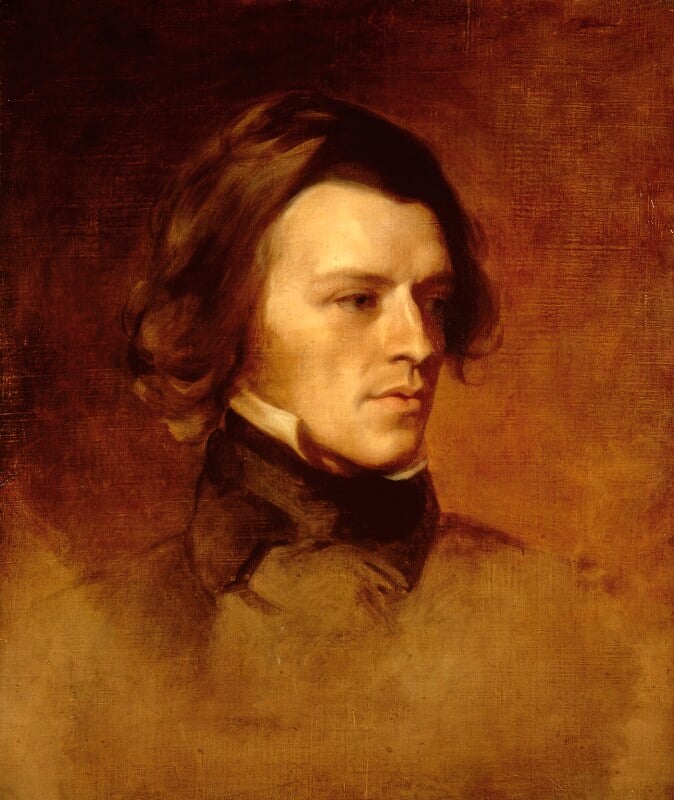 Fitzgerald and Tennyson first met as undergraduates at Trinity College, Cambridge, and remained lifelong friends. Fitzgerald commissioned Laurence, another close friend, to paint Tennyson around 1840, but his preference for lodgings prevented him from taking possession of it until 1867. In May 18, he wrote to Laurence (Wright, I, 195): 'I long for my old Alfred portrait here sometimes, but you had better keep it for the present.' He wrote again shortly afterwards, when Laurence was apparently contemplating another portrait (Wright, I, 196): 'I hear Alfred Tennyson is in very good looks: mind and paint him quickly when he comes to town; looking full at you.' In the same year, the NPG portrait was engraved by J. C. Armytage (example in NPG), for Home's A New Spirit of the Age (1844), and lithographed by J. H. Lynch, published Roe, Cambridge, c.1849 (example in NPG). Fitzgerald wrote two letters about the lithograph in 1849, the first to Laurence (Wright, I, 278): 'Roe promised me six copies of his Tennyson. Do you know anything of them?’ The second reference occurs in a letter to J. Allen (Wright, I, 279): 'A lithograph has been made from Laurence's portrait of him; my portrait: and six copies are given to me. I reserve one for you.'
The portrait itself was seen by Caroline Fox on 17 May 1846 (Memories of Old Friends, II, 53-4): 'To Samuel Laurence's studio to be drawn. Admirable portraits in his rooms of Hare, Tennyson, Carlyle, Aubrey de Vere and others.' In 1867, Fitzgerald finally took possession of the portrait, and soon afterwards gave it to Mrs Tennyson. He wrote to Wright in May 1881 (Wright, IV, 218):

'I know of no other portrait of A. T. by S. L. except that which I bought of him some forty years ago, and gave to Mrs T. as being one that she might be glad of - young and beardless. It was the only one of A. T. that I ever cared to have; though it failed (as Laurence and most other Painters do fail) in the mouth, which A. T. said was 'blubber-lipt'.'
In the last letter he ever wrote, Fitzgerald explained to Laurence why he had given away the portraits of Allen and Tennyson (Wright, IV, 317):

'Your drawing of Allen always seemed to me excellent, for which reason it was that I thought his wife should have it, as being the Record of her husband in his younger days. So of the portrait of Tennyson which I gave his Wife. Not that I did not value them myself but because I did value them, as the most agreeable Portraits I knew of the two men; and, for that very reason, presented them to those whom they were naturally dearer to than even to myself I have never liked any Portrait of Tennyson since he grew a Beard.'
The Laurence portrait, with its romantic and evocative mood, remains the most famous and the most reproduced image of the young and beardless Tennyson. It was one of the few portraits which Tennyson himself liked, and of which his family approved. Hallam, Lord Tennyson wrote in a letter of 25 November 1892 (NPG archives), when he was offering the copy of the Woolner bust (NPG 947): 'There is the young portrait without moustache or beard which is the finest save Watts - From this I could not part as it was given us by Edward Fitzgerald - but they might copy this.' Another portrait of Tennyson by Laurence was included in his sale, Puttick and Simpson, 12 June 1884 (lot 181). It is not known whether this was a version of the NPG picture, or a separate portrait altogether.