3 of 97 portraits of Alfred, Lord Tennyson 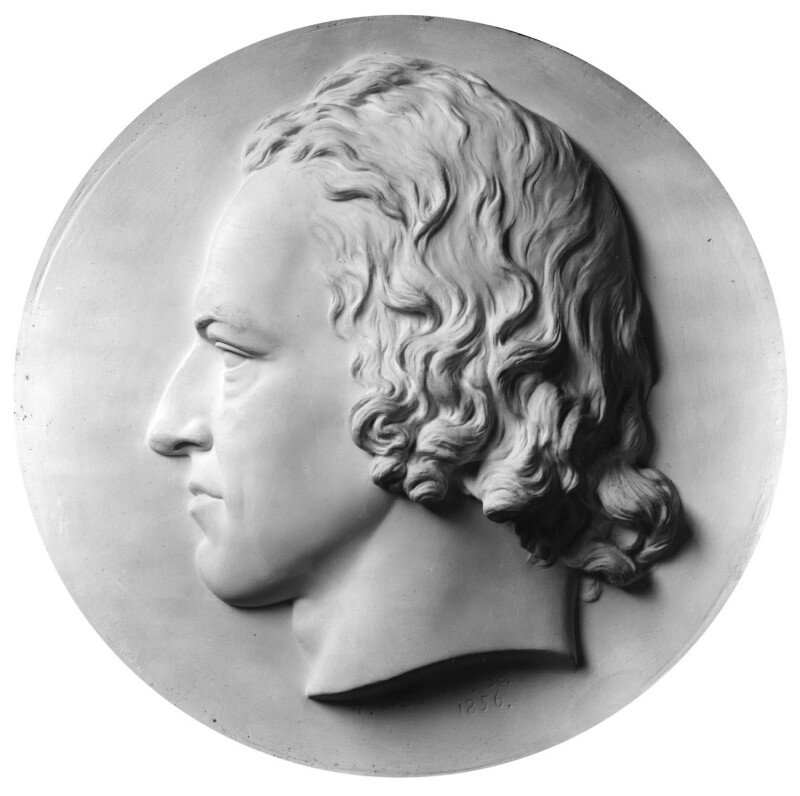 'You quite mistake in supposing that I have gone to any expense and trouble on your account ... for I have been gratifying my own feelings of admiration entirely in whatever I have done with regard to the medallion, and I am wholly indebted to your gracious kindness in permitting me to visit you at Coniston and doing so. Tell Mr Tennyson that I sent a cast to Mrs Fletcher as he desired - pray remember me in the kindest way to the divine man.'
The bronze medallion in the Usher Art Gallery, Lincoln, which differs in details from the NPG type and is in reverse, appears to be a version of the 1850-1 medallion.
Woolner was dissatisfied with this first medallion, and on his return to England from Australia determined to do another. On 25 December 1854, he wrote to Mrs Tennyson (Amy Woolner, p 105):

'I have been thinking of the medallion and have concluded it will be better to make another entirely of a smaller size ... Tell Mr Tennyson it will not require a great deal of time as I an. so well acquainted with his features now, and he need not anticipate it as an extraordinarily formidable task.'
The new medallion was finished in 1856, presumably after fresh sittings, though the type does not differ radically from the bronze medallion in the Usher Art Gallery (probably one of the 1850-1 type). According to Hallam Tennyson, Alfred Lord Tennyson: a Memoir (1897), I, 383, the new medallion was executed in March 1856. In July Woolner wrote to Mrs Tennyson (Amy Woolner, p 115):

'I was at the Browning's last night; I took them a cast of Mr Ten.'s med: they were immensely pleased - meant to have it framed and carry it about with them wherever they went. Browning said no likeness could possibly be better. I have improved it since you saw the photograph - it was upon your hint that it "looked scornful tho' very grand". I watched his face and now have put a slight touch of sweetness which I think is of golden value, and now I consider it the very best med. I have done. I have a cast for you when you please to claim it.'
Most of Tennyson's friends liked the medallion, Spedding writing to Woolner in September 1856 (Amy Woolner, p 117): 'Your medallion of the Laureate is magnificent, and puts all competitors out of the field.' Mrs Tennyson wrote on 11 November (Amy Woolner, pp 122-3): 'Dr and Mrs Mann are here and are delighted as well as A. and myself with the delicate yet lofty beauty of the medallion and with the grandeur of the bust.' The type was exhibited (in bronze) RA, 1857 (1370), and engraved as the frontispiece to the first illustrated edition of Tennyson's Poems (Moxon, 1857); for Woolner's letter to Mrs Tennyson about the engraving see Amy Woolner, p 12 and n. Woolner evidently produced quite a large edition of bronze and plaster casts from his medallion, and other examples, besides that in the NPG, are recorded; one is in the Gladstone-Glynne collection; others are reproduced Magazine of Art (1893), p 38, and in Amy Woolner, facing p 42.
Included in the same lot as the NPG medallion of Tennyson was a drawing of Woolner by D. G. Rossetti (NPG 3848), and a medallion of Helen Orme by Woolner; according to a label on the back, the former was presented to Mrs Charles Orme, apparently by Woolner himself, around 1860. Woolner also executed a medallion of Mrs Tennyson (see Amy Woolner, pp 112-4).