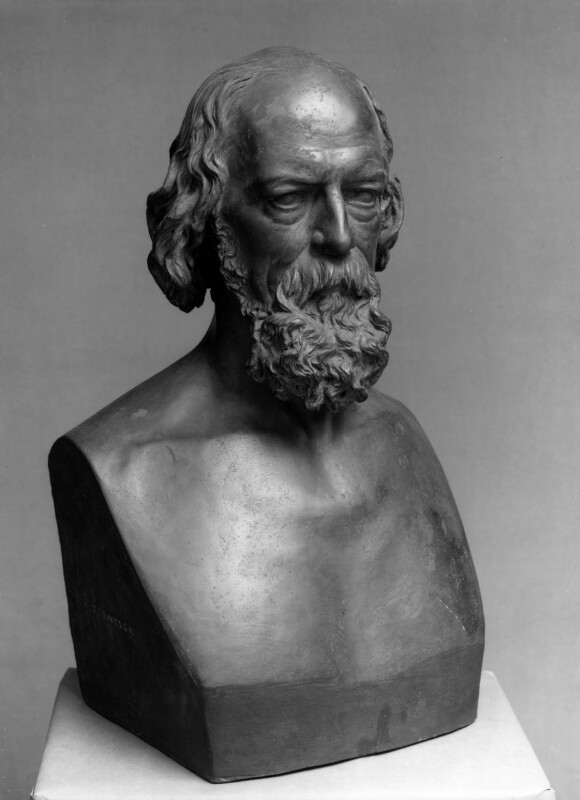 Incised on one side of the base: A. TENNYSON and on the other: T WOOLNER SC/1873

This plaster bust is one of a fairly large edition of casts from Woolner's original bust of 1873. The marble is in the Art Gallery of South Australia, Adelaide, exhibited RA, 1876 (1424), reproduced Magazine of Art (1893), p 98; this was at one time offered to the NPG (see NPG 947). A marble version of 1876 is in the Usher Art Gallery, Lincoln, possibly the bust in the Tennyson Centenary Exhibition, Fine Art Society, London, 1909 (76), lent by Mrs Woolner. A similar plaster cast, described as the original model, is in the Lincoln Central Library, and a bronze cast is in St Margaret's Church at Somersby. Hallam Tennyson, Alfred Lord Tennyson: a Memoir (1897), II, 152, records that his father was daily in Woolner's studio in the early part of November 1873 for sittings for the new bust. Amy Woolner, Thomas Woolner: his Life in Letters (1917), pp 305-6, called it 'the greatest bust of the Sculptor, a majestic and idealistic representation of the Poet Laureate'. Tennyson himself, however, much preferred the earlier, beardless bust of 1856-7 (see NPG 947). A photograph of Woolner at work on the marble bust is reproduced Amy Woolner, facing p 325. For a list of other medallions and busts of Tennyson by Woolner, see NPG 947.