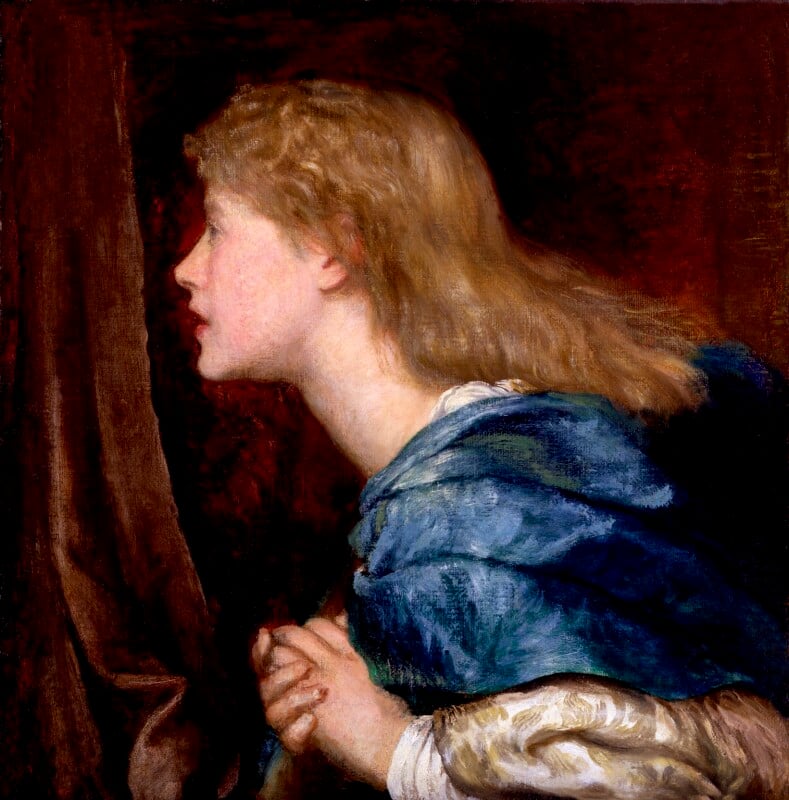 In about 1882, many years after Ellen Terry separated from George Frederic Watts, the artist spotted her in the neighbouring garden to his new ‘Little Holland House’ in Kensington. [1] This sparked a renewed, amicable correspondence between the pair, which lasted until 1886. Terry recalls that during this period he sent her ‘a portrait-head that he had done of me when I was his wife’, one of the few portraits of her that remained in his collection: ‘I think it a very beautiful picture. He did not touch it except to mend the edges, thinking better not to try to improve it by the work of another time.’ [2]

This was NPG 2274, which remained in Terry’s possession until her death and appeared in her sale at Christie’s on 17 December 1928 (16). [3] It was purchased for the National Portrait Gallery for £155, 10s by dealers Sampson & Son. [4] In the catalogue of her husband’s works, Mary Seton Watts records that this portrait was ‘Presented to the National Portrait Gallery by subscribers’. [5] This statement has been repeated in subsequent published literature, although no evidence to support it has been located. The minutes from the NPG Trustees meeting preceding the sale simply state: ‘The Director reported that the portraits of Dame Ellen Terry which were in her own collection were being sold at Christie’s on Monday, December 17th., and that so far as he could discover very few representations of her existed. After some discussion it was agreed that a sum of 200 guineas should be made available to bid at Christie’s for two portraits from the collection, an oil sketch in character by John Singer Sargent [see NPG 2273], and a painting by G.F. Watts.’ [6]

Although the marriage to Watts lasted just under a year, in her autobiography Terry is careful to stress her positive feelings towards the union: ‘“The marriage was not a happy one,” they will probably say after my death, and I forestall them by saying that it in many ways was very happy indeed.’ [7] It was certainly a productive artistic period for Watts, his young bride providing inspiration for a series of straight portraits and subject pictures (see ‘All known portraits, I. In private character, Paintings, drawings, sculptures and prints, 1862–3’, ‘1864’, ‘c.1864’, ‘c.1864–5’). The artist’s fascination with Terry is clear in his very first portrait of her painted in 1862, The Sisters, showing her seated with her elder sister Kate (Eastnor Castle, Herefordshire). At this time Kate Terry was gaining a reputation on the stage and Watts had admired her performance at the Lyceum Theatre. Ellen accompanied her on a visit to the artist’s studio, acting as chaperone. In the resulting double-portrait painterly attention is focused on the depiction of Terry’s striking facial features, her strong jawbone and large, searching eyes. In time Kate stopped sitting for the portrait, whilst Ellen continued, honoured to pose for Watts. [8] Ellen later recalled: ‘I was happy, because my face was the type which the great artist who married me loved to paint. I remember sitting to him in armour for many hours and never realising it was heavy until I fainted!’ [9]

Here, Watts shows Terry from the same angle as in Choosing (NPG 5048), although this version is larger and less tightly worked. He based the composition on a preparatory drawing featuring Ellen’s head only, inclining forwards, eyes looking up (see 'All known portraits, I. Paintings, drawings, sculptures and prints, c.1864–5'). [10] The oil on canvas has a sketch-like quality also; the paint has been applied with broad, confident brushstrokes, allowing the coarse weave of the canvas to show through. It is clear that the tenderly clasped hands, in particular, remain unfinished. The portrait is without doubt a testament to Terry’s beauty, but it also embodies Watts’s strong feelings towards the young actress at the time. These are reflected in the very careful rendering of varying flesh-tones, including the subtle flush of her cheek and the darker red of her lips, and the abundant mane of auburn hair as it falls over her shoulders. The artist positions his sitter within a luxurious environment; the white skin of her face and neck contrasts effectively with the deep crimson background and the blue-green of her shawl. The curtain hanging at the left-hand side of the composition is possibly a reference to the theatre. Certainly Ellen’s dramatic capacity is evident here. The manner in which she cranes forwards and holds her hands before her conjures a sense of energy and the anticipation of movement, almost as if she is about to stride forth onto the stage. [11]