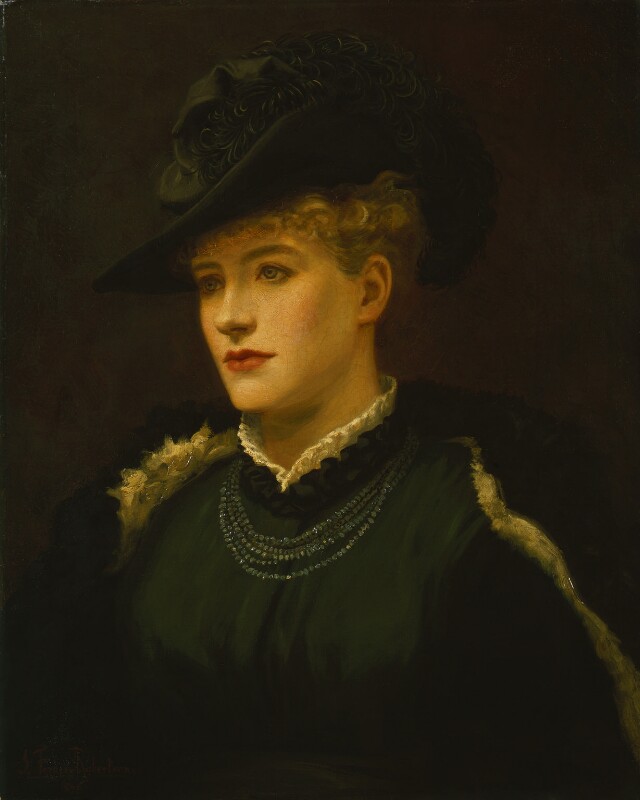 Although Sir Johnston Forbes-Robertson achieved lasting celebrity on the stage, arguably his true vocation was as an artist. As a young man he showed great promise, having studied at the Heatherley School of Fine Art and the Royal Academy Schools (1870-73). Financial circumstances prompted a change in direction and he decided to pursue the more lucrative opportunities offered by a career in the theatre. He continued to paint, however, exhibiting eight pictures at the Royal Academy between 1874 and 1888. Despite his success as an actor, he was never entirely comfortable in his profession, concluding in his 1925 autobiography, ‘I am persuaded, as I look back upon my career, that I was not temperamentally suited to my calling.’ [1]

In just his second stage role, Forbes-Robertson was cast alongside Terry in The Wandering Heir (1874). The play’s author, Charles Reade, advised him to call on the actress at her home in Taviton Street off Gordon Square, which she shared at the time with Edward William Godwin. This visit made a lasting first impression:

The floor was covered with straw-coloured matting, and there was a dado of the same material. Above the dado were white walls, and the hangings were of cretonne, with a fine Japanese-pattern in delicate grey-blue …. Presently the door opened, and in floated a vision of loveliness! In a blue kimono and with that wonderful golden hair, she seemed to melt into the surroundings and appeared almost intangible. This was my first sight of Miss Terry. I was undergoing a sort of inspection, but her manner was so gracious that it soon cleared away my embarrassment. [2]

(As part of his photographic series of portraits ‘At Home: sitters taken at their own residences’, Samuel Alexander Walker captured Terry in various poses ‘As a Japanese Lady’, wearing a kimono and holding a fan against a patterned background; see ‘All known portraits, I. In private character, Photographs, c.late 1870s’. As the date of this session is unconfirmed it is not possible, although tempting, to conclude that it occurred at Terry’s Taviton Street address.)

Terry herself was impressed by the young actor, recording in 1908:

The hero of ‘The Wandering Heir,’ when I first took the part of Philippa was played by Edmund Leathes, but afterward by Johnstone [sic] Forbes-Robertson. Everyone knows how good-looking he is now, but as a boy he was wonderful – a dreamy poetic looking creature in a blue smock, far more of an artist than an actor – he promised to paint quite beautifully – and full of aspirations and ideals. In those days began a friendship between us which has lasted unbroken until this moment. [3]

The exact nature of their friendship has not been established conclusively. Certainly Forbes-Robertson admired the older actress. Several of Terry’s biographers assert that he was in love with her from this time, although Ellen chose to marry the actor Charles Wardell, 14 years Forbes-Robertson’s senior, after her unconventional years with Godwin. [4] His continued affection is reflected in this carefully rendered depiction of Terry which, according to the artist’s niece, hung in his studio for as long as she could remember. [5] It is tempting to regard this portrait as a private tribute to Ellen’s beauty; her face is dramatically lit to accentuate her fair skin, wide sensuous lips and mass of blond curls. Terry is not in costume, yet there is a theatricality to her appearance. The bold curve of her wide-brimmed hat is continued through the arc of the ostrich plume with which it is decorated. The fur-trimmed cape and beads at her neck stand out against the deep green of the dress, creating a sense of luxury and texture. Photographs from the mid-1870s confirm that this was Terry’s personal style (See ‘All known portraits, I. In private character, Photographs’). A particular image by the London Stereoscopic Company shows the actress in profile to the left wearing a high-necked dress with a lace collar, her hair similarly caught up under a feathered hat (V&A, London, S.133:201-2007).

In his choice of simple composition - the close-up head-and-shoulders pose set against a neutral background - Forbes-Robertson adheres to an established format for contemporary portraiture pioneered by artists including George Frederic Watts, who focused painterly attention upon the delineation of facial features, as a means of providing insight into the character and identity of his sitters. The practical advice given to Forbes-Robertson by the portrait painter Walter William Ouless with regards to work in this genre stayed with the artist: ‘He showed me the importance of getting the broad general masses of a head at the first stages of painting, and put off handling details as long as possible, in order that the main proportions might be thoroughly fixed.’ [6]

NPG 3789 occasioned some positive responses when exhibited at the RA in 1876. A reviewer of the Magazine of Art remarked on ‘a very sympathetic rendering of the fair, startling face of “Miss Ellen Terry”’, whilst the Graphic recorded it as ‘a charming portrait of this most charming actress’. [7] Upon viewing the portrait Sir George Scharf was prompted to annotate his copy of the exhibition catalogue with the following note in the margin: ‘face ¾ to l. blk hat y. hair grey green dress with turquoise blue beads’. [8] The first Secretary (and future Director) of the National Portrait Gallery could not know that this painting which caught his attention would enter the collection 75 years later. It was bequeathed to the NPG by the artist’s widow, formerly Gertrude Elliott, and accepted by the Trustees in February 1951. [9]

A reproduction of the portrait in Terry’s 1908 autobiography appears to show some damage to the canvas at the bottom and on the right-hand side. It was possibly repaired after acquisition; a quote for conservation dated December 1951 states an intention ‘To reline, repair and revarnish’ the portrait. [10]