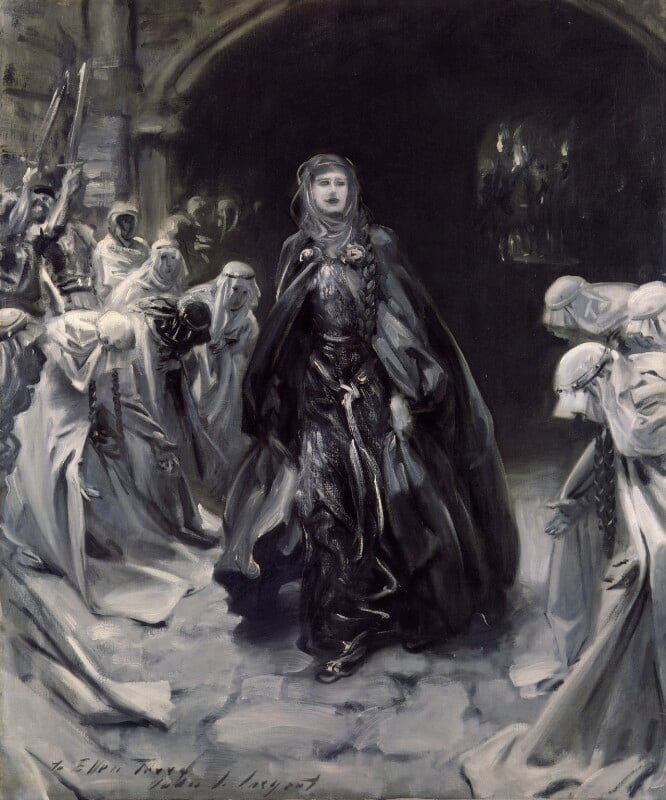 John Singer Sargent began work on his portrait of Ellen Terry as Lady Macbeth, now in the Tate, London, N02053, early in 1889. [1] Oscar Wilde observed of the spectacle of Terry turning up for a sitting at the artist’s studio in Tite Street, Chelsea, already in costume: ‘The street that on a wet and dreary morning has vouchsafed the vision of Lady Macbeth in full regalia magnificently seated in a four-wheeler can never again be as other streets: it must always be full of other possibilities.’ [2] Although the finished composition depicts Terry standing alone in her famous beetle-wing dress, Sargent’s initial idea for the portrait was to show Lady Macbeth’s entry in Act 1, scene 6, when she comes out of Macbeth’s castle by torch-light to welcome Duncan. Terry recalls the artist’s attraction to the scene: ‘He liked the swirl of the dress, and the torches and the women bowing down on either side. He used to make me walk up and down in his studio until I nearly dropped in my heavy dress, saying suddenly as I got to the swirl: – “That’s it, that’s it!” and rushing off to his canvas to throw on some paint in his inimitable fashion!’ [3] Sargent was deeply impressed with Terry’s performance in the play, which marked a significant point in her partnership with Henry Irving at the Lyceum Theatre. He attended the opening night on 29 December 1888 and apparently ‘let out an audible gasp’ as she strode onto the stage in the dim gaslight. [4]

Sargent subsequently discarded this idea, but gave Terry his coloured oil sketch for the design, which she treasured (see NT, Smallhythe Place, Kent, 1118214). [5] In 1906 she wished to reproduce her version as an illustration in the programme for her jubilee matinee performance at Drury Lane on 12 June. The actress wrote to Sargent asking his permission to do so and, anxious that the preliminary sketch would not reproduce well, he offered to rework the design for this purpose: ‘… in the height of the season and of his work with fashionable sitters, he did an entirely new painting of the same subject, which would reproduce! … “You must think of me as one of the people bowing down to you in the picture,” he wrote to me when he sent the new version for the programme. Nothing during my jubilee celebrations touched me more than this wonderful kindness of Mr Sargent’s.’ [6]

The result is a larger, more tightly worked composition in grisaille. Whilst the sense of movement conveyed through the looser brushwork of the original is somewhat lessened here, a great deal of detail added to the figure of the actress and the lines of attendants helps to give the scene more definition. [7] The artist also pays closer attention to the architectural forms, the cobblestones in the foreground and the stone archway behind. Sargent’s juxtaposition of light and dark tones is masterful, as evidenced by the rendering of Terry’s voluminous cloak. The addition of just a few careful strokes and white highlights reveals a group of figures standing at the end of the dark tunnel holding torches, at once creating an illusion of depth within the picture plane.

NPG 2273 remained in Terry’s possession until her death and appeared as lot 13 in the sale of her collection at Christie’s, on 17 December 1928 (erroneously described as ‘The First Study’ for the picture). It was purchased by the National Portrait Gallery for £63, through Leggatt Brothers, who acted on the NPG’s behalf. The 1992 condition report notes that a large newspaper cutting pasted onto the reverse of the canvas was removed and stored with other associated objects. [8] This is a copy of a Punch cartoon by Bernard Partridge published in 1906. [9] It is entitled ‘Desirable Aliens’ and depicts Sargent walking along the street with Diego Velázquez; Ellen Terry as Lady Macbeth can just be seen tucked under his arm, whilst the Spanish artist holds the Rokeby Venus. Both pictures were purchased for the national collection that year, going to the Tate Gallery and the National Gallery respectively.

Whole-length to front, wearing long robe and headdress; flanked by attendants at entrance to castle.

[Jubilee Souvenir Programme] ‘Souvenir Programme given by the Theatrical & Musical Professions as a Tribute to Miss Ellen Terry, on the Occasion of her Jubilee’, 12 June 1906, fig.5 (copy Bristol Theatre Coll., TCW/M/000037).