1 of 2 portraits by Cyril Roberts 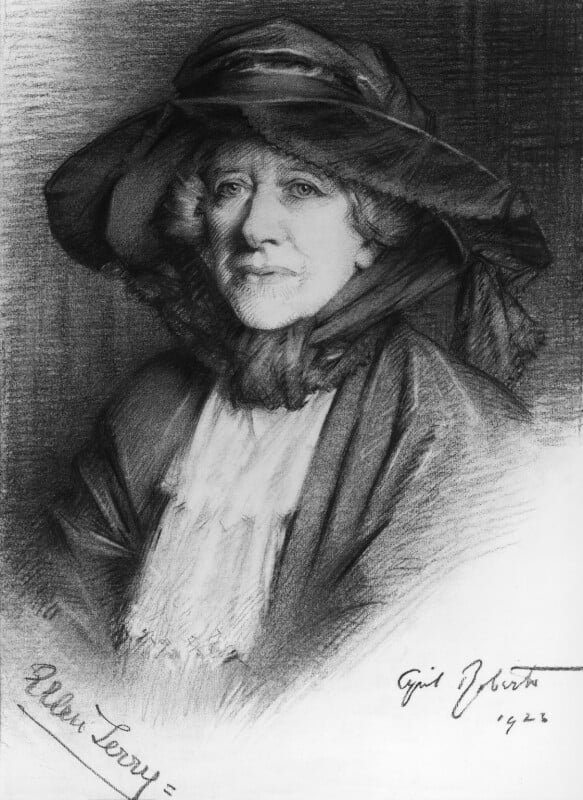 An internal memorandum written by the National Portrait Gallery’s Director Henry Hake on 5 October 1948 outlines the nature of this acquisition:

Mr T.C. Dugdale rang me up today to say that his friend Mr Cyril Roberts had been himself a very old friend of Ellen Terry and had done a drawing of her in old age. Mr Roberts was now himself becoming very old and Mr Dugdale was at pains to persuade me that it would give his friend great pleasure to have the portrait accepted by the National Portrait Gallery. [1]

An engraving after the drawing, also inscribed by Terry, is in the art collection at the Garrick Club, London, G0954. According to a label on the reverse of the frame, this print was presented to the club by one Marjorie Clarke Jervaise, ‘a friend of both artist and sitter’. Unfortunately, when or where Roberts met Terry, and the character of their friendship, is unknown.

Cyril Roberts was an artist whose output largely consisted of portraits in oil and pastel and landscapes in watercolour. Between 1889 and 1896 he studied at the Royal College of Art, the Slade School of Art and the Académie Julian, Paris. He went on to exhibit over 100 pictures at the Royal Society of British Artists (1904–30), the majority of which were portraits. Of the 14 of his works exhibited at the Royal Academy (1910–46), two were portraits in charcoal. Thomas Cantrell Dugdale was also a student at the RCA and the Académie Julian, where the men’s paths may first have crossed. They were neighbours in the 1940s, Roberts living at 57 Glebe Place, Chelsea, and Dugdale at number 58.

This large drawing shows Terry aged 76. Contemporary photographs confirm that she favoured this style of dress, often wearing soft broad-brimmed hats draped with fabric and secured under the chin by means of a long scarf (see for example ‘All known portraits, In private character, Photographs, 1908’ and ‘1925 [by Ridley’s Studios, pose a]’). Indeed, her appearance is very similar to that in Walford Graham Robertson’s 1923 portrait showing the actress dignified and serene in ‘beautiful old age’ (NPG 3132). Roberts’s likeness is equally sympathetic. He takes care to render the strong and still-handsome features, yet also evident here is an anxiety which has crept into Terry’s expression. Her watchful eyes and the tension visible around her slightly pursed mouth hint already at the confusion and uncertainty that would accompany her final years.

1) NPG RP 3662. An inventory compiled by the artist’s family in the 1920s makes reference to a black-and-white framed chalk drawing of Ellen Terry (information provided 20 May 2013 by Robert Peploe, whose grandfather was Roberts’s nephew by marriage). Although it is not certain that this is the NPG’s version, the reverse of the frame for NPG 3662 bears the label of the Rowley Gallery in Kensington. This business did undertake occasional framing work for the NPG, but only between 1928 and 1937. The style of the label can in fact be dated to c.1912, suggesting that the portrait entered the collection in a frame already owned by the artist.

Presented to the Gallery by Thomas Cantrell Dugdale, RA, acting on behalf of the artist, 1948.