20 of 30 portraits matching these criteria: 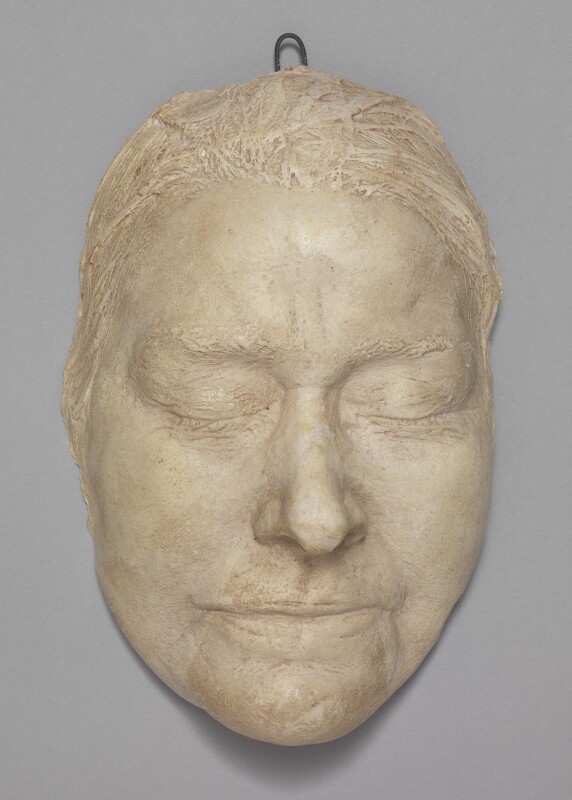 Ellen Terry’s physical and mental health deteriorated slowly over a number of years. By the 1920s her eyesight was very poor and she had become increasingly confused. For financial reasons she was obliged to sell her Chelsea house in 1921 and took up residence in a smaller flat in Burleigh Mansions, St Martin’s Lane. In her diary for 26 April she reflects upon the move: ‘I am unhinged (not unhappy) and comfortable. I wonder where everything is. Cannot remember new things. All is changed. Change at 73 puzzles the will. I live in puzzledom.’ [1] She retained her country home at Smallhythe, however, and it was there she spent her last years, gradually ‘drifting away into a strange vague world where nothing is real and people bear no names’. [2] She died early in the morning on 21 July 1928, following a paralysing stroke. The writer Christopher St John (née Christabel Marshall), present at Ellen’s bedside with her daughter Edith Craig, described her final hours:

The face had not been much changed by that cruel blow from Nature. But the breath of life had changed. It came more and more painfully as the dawn approached. The hand, gripping Edy’s, moved from finger to finger, and with a last effort of the voice, not miraculously clear and loud now, but thick and indistinct, spelt out on those fingers the word ‘Happy’, ‘H-a-p-p-y’ over and over again. [3]

When death finally came there was an almost palpable sense of relief in the house, as the suffering which had accompanied her difficult later years ended. Her son (Edward Henry) Gordon Craig recalled: ‘Mother looked 30 years old when she had ceased breathing the thin air of this small earth … a young beautiful woman lay on the bed, like Juliet on her bier.’ [4] Terry’s funeral took place at Smallhythe church on 24 July.

The day after her death, local sculptor and medallist Margaret Winser made a mould of her face, from which three casts were produced. She was assisted in her task by Harvey Ronald Allen (known as Kim Allen), a professional model-maker for museums, who lived in Westerham, Kent. [5] Winser (1868-1944), who lived near Ellen in Tenterden, exhibited 12 works at the Royal Academy between 1904 and 1929, including a posthumous bust of Terry (see ‘All known portraits, I. In private character, Posthumous portraits, exh. 1929’). Winser also appears to have modelled the actress from life. An earlier plaster medallion relief dated 1913, showing Ellen profile to left, is in the collection at Smallhythe Place (See ‘All known portraits, I. In private character, Paintings, drawings, sculptures and prints’).

Of the three casts made from the death mask, one remained at Smallhythe (NT, Smallhythe Place, Kent, 1118505), as did the plaster moulds for the mask (1118529). [6] Another was given to the Memorial Theatre in Stratford-upon-Avon in 1933 (RSC Collection, STRPG:M:2010.1), and the third was presented to the National Portrait Gallery in 1949 by Clare Atwood, an artist and friend of the family. [7] Atwood, also known as ‘Tony’, took up residence with Edith Craig and Christopher St John in 1916 in their flat at 31 Bedford Street, Covent Garden. This ménage à trois continued until Craig’s death in 1947, during which time the three women spent extended periods at Priest’s House, their second home close to Terry’s at Smallhythe. Along with St John and Craig and Ellen’s niece Olive Terry, Atwood maintained a vigil at the dying actress’s bedside and produced two pencil sketches showing Terry’s strong features serene and composed, her hands tenderly folded across her chest. [8]

Also in the collection at Smallhythe are two plaster casts of Terry’s hands, with fingers interlinked in the manner depicted in Atwood’s sketch (NT, Smallhythe Place, Kent, 1118535.1 and .2). Although these are undated and the sculptor is not identified, it seems likely that Winser made a mould of Terry’s hands at the same time as the death mask. This is made more plausible by the fact that the sculptor based her bust of Terry on these posthumous casts of the hands and face. [9]