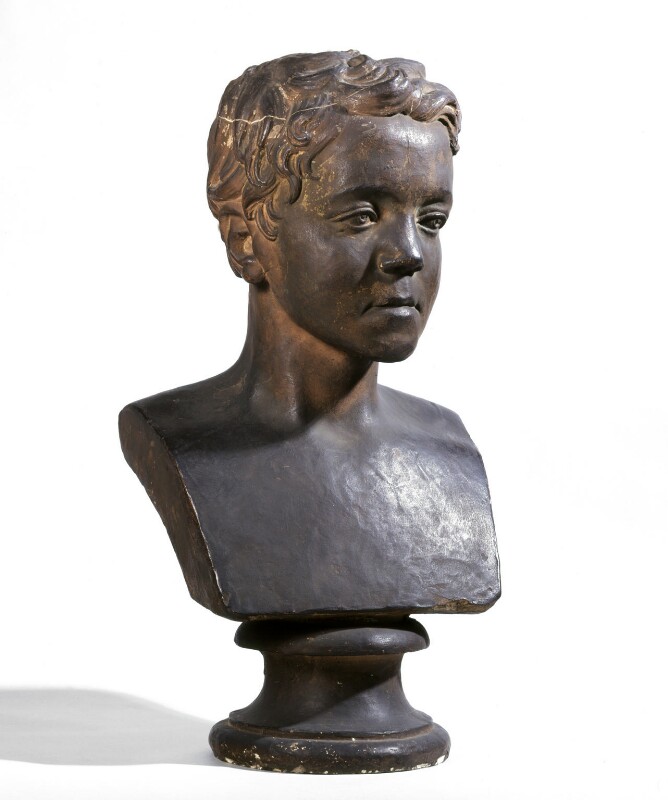 Deville was an Italian sculptor, who had perfected a process for taking moulds of faces from the life, with the help of straws to prevent suffocation. He took a mould of Thackeray's features at the home of Thackeray's mother in Devonshire, which he then modelled into a bust. This was apparently very accurate as a likeness. Lady Ritchie, who owned the original bust, exhibited VE, 1892 (1084), where attributed to 'Delisle', reproduced G. N. Ray, Thackeray: The Uses of Adversity (1955), plate III, allowed Boehm to make two casts from it, and presented one to Leslie Stephen, and the other to Lady Airlie (information in letters from Lady Ritchie and Leslie Stephen, NPG archives). She later sent another cast to Major Lambert, sold Anderson Galleries, New York, 26 February 1914 (lot 571), and allowed a marble copy to be made from this under the direction of E. Onslow Ford, sold Anderson Galleries (lot 570); the latter is possibly the marble bust after Deville now in the collection of E. Steese, New York. The original Deville cast is now owned by Mrs J. E. Martineau.
In return for having these busts made, Major Lambert agreed to pay for alterations to Baron Marochetti's unsatisfactory bust of Thackeray in Westminster Abbey of c.1866. These alterations were carried out under the supervision of Onslow Ford, who arranged for H. Wernher to execute a copy of the restored Marochetti bust for Major Lambert, sold Anderson Galleries (lot 572).