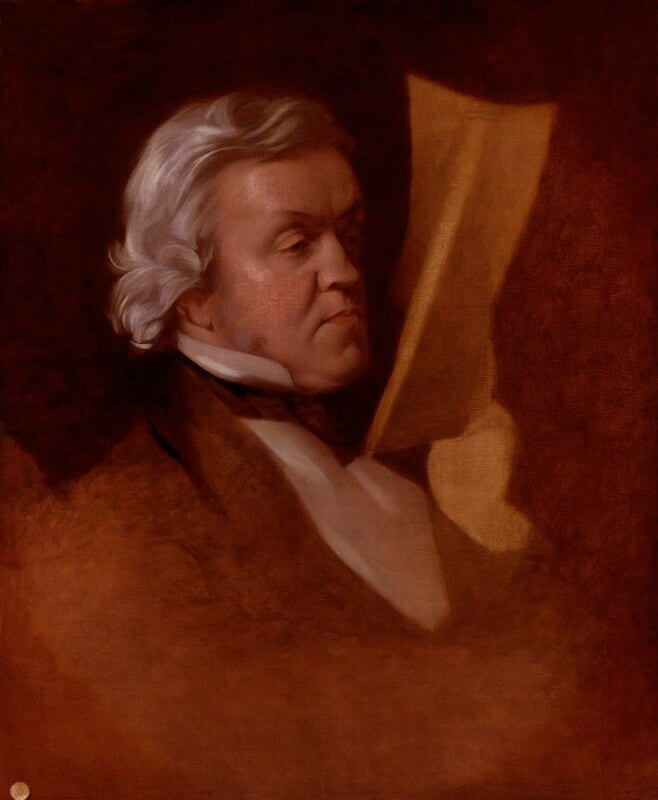 This unfinished painting is one of several versions, most of them posthumous, showing Thackeray in profile reading a paper. In the case of famous sitters, Laurence was frequently able to obtain several commissions for replicas. The original crayon drawing of Thackeray by Laurence (signed, and dated 1862), from which this portrait and the other versions are derived, is in the collection of Mrs Ritchie, London, exhibited SKM, 1868 (603). It was given by Thackeray to his great friend, Sir Frederick Pollock, in exchange for a portrait of Pollock by Laurence (now in the NPG, 732). Thackeray wrote: 'The Chief Baron was dining with me the other day and we laid our heads together to make a little plan for a painter friend of ours to take each of our heads off' (The Times, 22 January 1864). According to Lady Ritchie, Thackeray's daughter, they exchanged portraits 'out of friendship for each other & for the painter too' (letter of 27 June 1884, NPG archives). Pollock later presented the drawing of Thackeray to Lady Ritchie, in exchange for a crayon replica, executed c.1863-4; the latter was exhibited VE, 1892 (418). Other replicas are listed below:
1 Crayon copy, commissioned by Anthony Trollope, 1864. Collection of Professor G. N. Ray.
Reproduced G. N. Ray, Thackeray: The Age of Wisdom (1958), plate XXI.
2 Crayon copy. Collection of Major Lambert, sold Anderson Galleries, New York, 26 February 1914 (lot 560).
3 Crayon copy (1862). Collection of F. Hyde, 1937.
4 Crayon copy (1864). Collection of K. Tite, 1968, apparently the drawing (signed, and dated 1864), sold Christie's, 25 November 1969 (lot 199), bought Sawyer.
5 Oil copy, commissioned by George Smith, 1862. Collection of Colonel and Mrs T. R. Badger.
6 Oil copy, commissioned by Edward Fitzgerald, 1864. Christie's, 8 December 1883 (lot 16).
7 Oil copy. Collection of W. Crewsdon, 1948. Exhibited Japan-British Exhibition, London, 1910, 'British Section of Fine Arts' (63).
8 Oil copy (unfinished). Collection of Mrs W. Bevan, 1892. Exhibited VE, 1892 (206).
9 Oil study. Puttick and Simpson, 12 June 1884 (lot 158), bought Colnaghi, together with NPG 725.
Possibly one of the versions listed above.
Thackeray was a close friend of Laurence for many years, and helped to secure him patrons. They probably met through Edward Fitzgerald in the early 1840s, but only became intimate after George Smith the publisher had commissioned a drawing of Thackeray from Laurence in 1852. In 1853 Thackeray wrote to Bancroft (Thackeray Papers, III, 317): 'I think Lawrence [sic] is the best drawer of heads since Van Dyke.' In a humorous letter to Laurence of the same year (Thackeray Papers, III, 89), Thackeray wrote: 'I hereby appoint Samivel Laurence Esquire, my Portrait-painter in Ordinary, and forbid all Hartists to attempt to paint my Mug save and excepting the said Samivel & the undersigned Thackeray.' The 1852 drawing, in the collection of Mrs Dickinson (a descendant of Smith), is the best and most famous of all Laurence's portraits of Thackeray. It was exhibited RA, 1864 (679), engraved by F. Holl, published 1853 (example in NPG), and by G. Kruell (reproduction in NPG), and etched anonymously (example in NPG); it was also reproduced in woodcut form in many contemporary journals (some cuttings in NPG). As in the case of the 1862 drawing, there are a number of replicas:
1 Collection of Lord Northampton.
2 Berg Collection, New York Public Library, reproduced J. W. Dodds, Thackeray: A Critical Portrait (1941), frontispiece.
3 Formerly collection of Major Lambert, sold Anderson Galleries, New York, 26 February 1914 (lot 561), reproduced L. Melville, W. M. Thackeray (1910), II, facing 8.
4 Formerly collection of Mrs Clive Bell (now destroyed).
5 Formerly collection of F. T. Sabin, exhibited Thackeray Exhibition, Old Charterhouse, London, 1911 (47); in the catalogue it is said to be dated 1842, presumably in a misreading or misprint for 1852.
6 Puttick and Simpson, 12 June 1884 (lot 195), bought in; possibly one of the versions above.
7 British Museum (signed and dated 1848). This drawing is evidently after the 1852 drawing.
8 Collection of R. Metzdorf, USA, from the Whitelaw Reid collection. Apparently the drawing (signed, and dated 1849) in the collection of D. E. Grant, 1938, also said to be from Whitelaw Reid (the sizes are the same). The authenticity of this drawing is questioned by Miles.
A different oil portrait, showing Thackeray almost full-length, with his hands in his pockets, is in the Reform Club, London, commissioned in 1881; it was in the Thackeray Exhibition, 1911 (77), where it is erroneously dated 1864 in the catalogue, and is reproduced L. Melville, W. M. Thackeray (1910), II, facing 40. Another version of this type and a study were in the Laurence Sale, Puttick and Simpson, 12 June 1884 (lot 159), bought in.