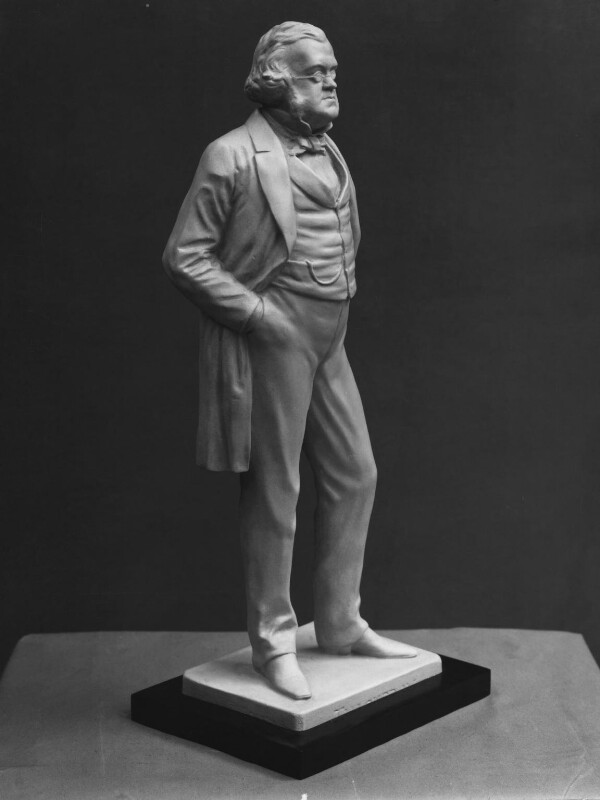 Incised on the front of the base: THACKERAY at the side J. E. BOEHM fec/1864 and on the back Copy

According to Kitton, who interviewed the sculptor shortly before his death, Boehm began modelling a statuette of Thackeray in wax during the course of two half-hour sittings which Thackeray gave him in Paris in 1860. On his return to England, however, Thackeray refused to give Boehm any further sittings, because he thought the rough nature of Boehm's model indicated its probable failure. On the novelist's death, Boehm was reminded of the unfinished statuette, and on the advice of Millais quickly finished it. He then produced seventy casts from the original stauette, some in plaster and some in bronze, which were sold in less than three weeks. The type was exhibited RA, 1864 (959). Other known casts are as follows: the Athenaeum, London; the Garrick Club, London; VE, 1892 (1085), lent by Lady Ritchie; collection of Miss Fraser, 1926; formerly collection of Anthony Trollope; Charles Sawyer Ltd, 1938 (catalogue 147, no.351): this was the statuette given by Lady Ritchie to Arthur Clough, as a wedding present; formerly collection of Major Lambert (bronze and plaster casts), sold Anderson Galleries, New York, 26 February 1914 (lots 575 and 576); Thackeray Exhibition, the Old Charterhouse, London, 1911 (67), lent Messrs E. Parsons & Co.
A large drawing by Boehm, in the collection of Sir Arthur Elton, corresponds with the front view of the statuette. A label on the back describes it as a 'cartoon' by Boehm for a statue of Thackeray, but there is not sufficient evidence to decide whether it is Boehm's original cartoon for a much larger statue (the sizes of cartoon and statuette do not correspond), which he never executed, or a copy after the statuette. It is quite possible that Boehm hoped to stimulate a commission for a life-size statue with the production and sale of the statuettes.

Mrs Wylie, presented by her in memory of her husband, Charles John Wylie, 1900.