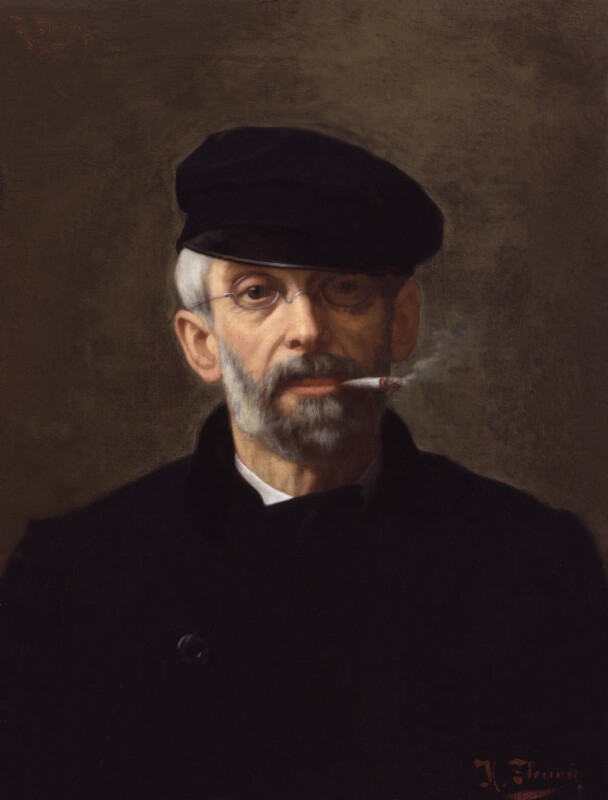 At his funeral in Liverpool in 1891, in front of crowds of mourners the clergyman described Hugh Owen Thomas as a driven man: ‘Work was his meat and drink; work of the most practical and urgent kind. He never spared himself. He used up every bit of life that was in him. … Each day he wrought with his might as though it was his last and only chance.’ [1]

By the time of his death, Thomas had garnered an extraordinary reputation, thanks to his busy practice at 11 Nelson Street, his innovatory splints and other osteopathic devices – even his appearance. According to an American visitor in 1887 the surgeon was ‘a thin, sallow little man about 5ft. 4 in. tall … dressed in black, with a cap with a glazed peak cocked over one eye, thick-lensed spectacles, a ragged brindle beard, and a cigarette in his mouth’. [2]

Such a type would have had little time for portraiture, as is reflected in the iconography, which is predominantly photographic, with many sittings taking place in the surgery. [3] The only artist Thomas seems to have sat for was Hermann Fleury, a German who arrived in Liverpool c.1877 and stayed until 1888. [4] Fleury’s two oils of Thomas are of a date, probably early 1880s; he also painted him in watercolours.

The main portrait (Royal College of Surgeons of England, London, RCSSC/P 216) shows a three-quarter-length, bare-headed figure seated against a bookcase, and is based on a photograph. The present portrait, NPG 3167, is a bust-length detail, also a faithful copy of a photograph (see ‘All known portraits, Photographs, 1880s, pose (2)(c)’): here Thomas is shown in his signature sailor’s cap, a cigarette clamped between his lips (a habit taken up during the 1864 cholera epidemic); such smoking was still unusual. Thomas wears the same velvet-collared coat in both paintings. It is suggested here that Fleury, who had worked as a photographer and a painter in Germany, also took the photographs. [5] Such a combination of skills would have made him acceptable to Thomas, and better able to paint his ‘restless, disturbing and always challenging personality’. [6]

The bust portrait was offered as a gift to the National Portrait Gallery by Maxwell Wimpole in September 1943; [7] his father had discovered it with a Liverpool dealer soon after Thomas’s death. [8] Maxwell Wimpole had been Thomas’s patient in the 1880s and could vouch for the likeness (‘it is a good likeness and just as I recollect him’ [9]); and he claimed ‘a hazy recollection that the artist had painted it for himself’. [10] In 1943 the bust was hanging in Wimpole’s rooms at the Bembridge Hotel near Regent’s Park, London. On acquisition by the Gallery in 1943 the painting was dated c.1890, but this is too late as Thomas looks relatively vigorous, and Fleury had left Liverpool by 1888. [11]

The commercially primed canvas has not been relined; the portrait is in a gilt cassetta frame produced by Paris’s, a Liverpool frame manufacturer located just a few streets away from Thomas’s Nelson Street practice.

Head-and-shoulders, facing, smoking a cigarette; grey hair, moustache and beard; wearing steel-framed spectacles under a peaked cap, and a buttoned-up overcoat with a velvet collar.

Purchased by Mr Wimpole from a Liverpool art dealer, after 1891; by descent to Maxwell Wimpole, by whom given, 1943.