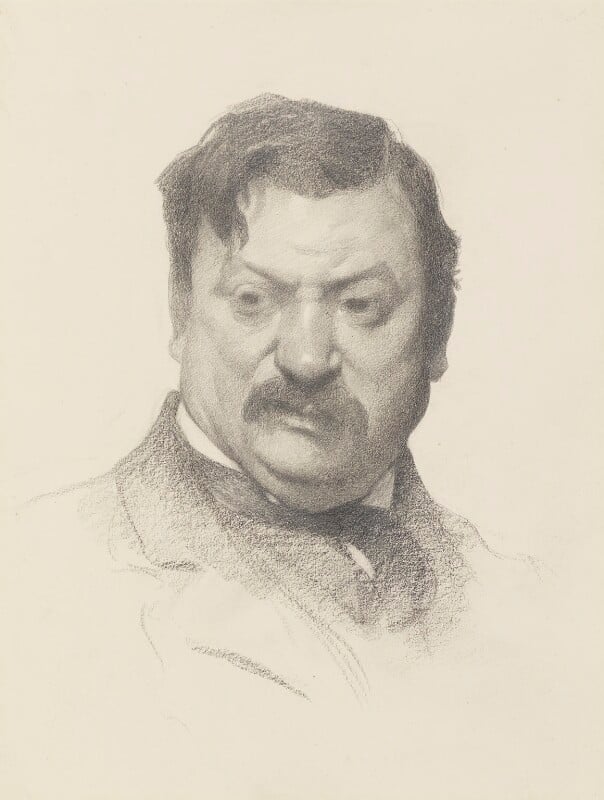 James Kerr-Lawson was a Canadian artist who studied at the Académie Julian in Paris between 1881 and 1884, the same years that James Havard Thomas was a student at the École des Beaux-Arts. On moving to London in 1900 Kerr-Lawson took a studio in Glebe Place, Chelsea; this street was also Thomas’s address when he died in 1921. As well as being neighbours both men belonged to the International Society of Sculptors, Painters and Gravers and to the Chelsea Arts Club. [1]

Kerr-Lawson made two known drawings of Thomas. One is a quick sketch of the sculptor asleep, taken in Taormina (Tate, N04187) during Kerr-Lawson’s visit to Sicily in 1910. The other, NPG 2115, is undated but belongs to a group of large tonal heads he made around 1910, some of them preparatory to lithographs. [2]

His portrait drawings were brought to the attention of the National Portrait Gallery by Lord Rothschild, at the time of the Beaux Arts Gallery’s Thomas retrospective in 1926. The NPG Trustees chose two drawings from a selection sent for inspection by the artist. The usual Ten-Year Rule had to be suspended to allow the purchase of the drawings of Thomas and William De Morgan at £25 each. [3]

The brooding expression in Thomas’s portraits by Kerr-Lawson and William Rothenstein (see ‘All known portraits, By other artists, 1920’) is a reminder of his troubled dealings with the Royal Academy and other art establishment bodies. [4]

The frame was repaired and gilded by F. Draper after acquisition in 1926; the drawing is presently unframed (2007).