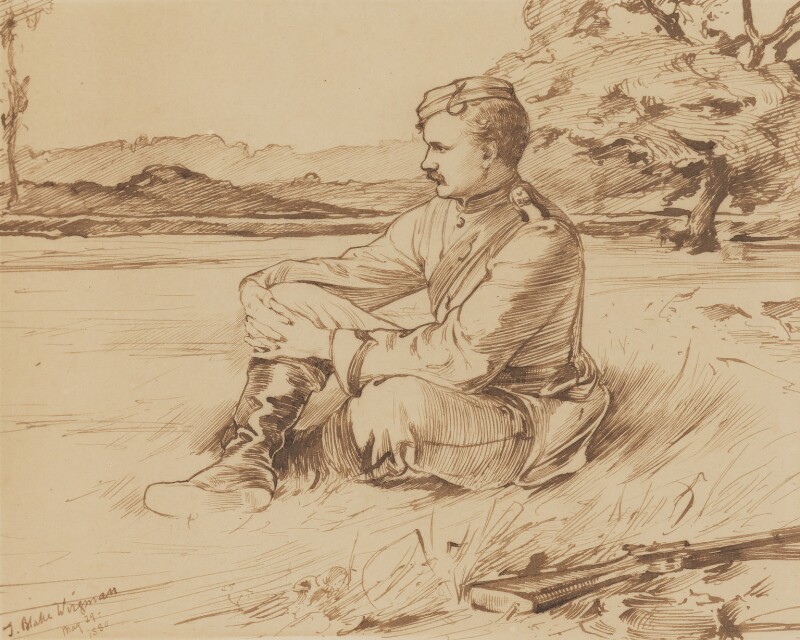 This drawing of Thornycroft in the uniform of the Artists’ Rifles, which he joined in 1871, shows him on a field day during a break between exercises. It depicts him in the same pose as in a large engraving showing the Volunteer regiment on Wimbledon Common, drawn by Wirgman for the Graphic in July 1876, [1] and seems to have been copied from that composition; alternatively, it could be an original study for the group portrait, retrospectively signed and dated, although the ink of the inscription appears to be the same as that of the drawing.

Thornycroft was an enthusiastic member of the Volunteer movement, participating in the major manoeuvres each Easter and those at Wimbledon in July. In 1874 his diary recorded the following: ‘Our corps (Artists) have had several good battalion drills especially on Easter Monday when we marched about 20 miles: to Richmond Park, Wimbledon and back to London.’ He added, ‘Prinsep’s company “A” that is really composed of artists (the other four companies consisting of architects, clerks etc) carried off the prize for the best drill and keeps its place at the head of the battalion I am glad to say, being a member of it myself.’ [2]

Theodore Blake Wirgman, graphic artist and printmaker, was born into a Swedish family in Louvain, Belgium, and studied at the Royal Academy Schools, London, and then with Ernest Hébert in Paris. On returning to Britain he worked primarily for the Graphic between 1875 and 1901. He and Hamo Thornycroft were coevals and friends as well as fellow-Volunteers; in 1870 Wirgman painted the sitter’s mother Mary Thornycroft and several other portraits of Hamo by Wirgman are known (see ‘All known portraits, By other artists, publ.1881, c.1881, exh.1883, 1884, 1885’). [3] In 1890 Thornycroft exhibited medal portraits of Wirgman and his wife. [4] A further seven portraits by Wirgman are in the National Portrait Gallery collection.

Another close friend of the sitter was Edmund Gosse, from whose collection the present work was acquired. He predicted that ‘1880 must be a great year’ for Thornycroft, who would be ‘a roaring lion’ by its end.[5] So it proved. By the date on this drawing, which may reflect the date Gosse acquired it, Thornycroft had stepped over the threshold of fame: his much-admired figure of Artemis with her hunting hound (RA 1880 (1566)) had been commissioned in marble by the Duke of Westminster and eight months later he was elected ARA. In June 1881 Gosse commissioned Wirgman to draw a portrait of Thornycroft working on Artemis which, if executed, is currently untraced. [6]

Sir Edmund Gosse; in collection of portraits presented by Lady Gosse and family, 1928.