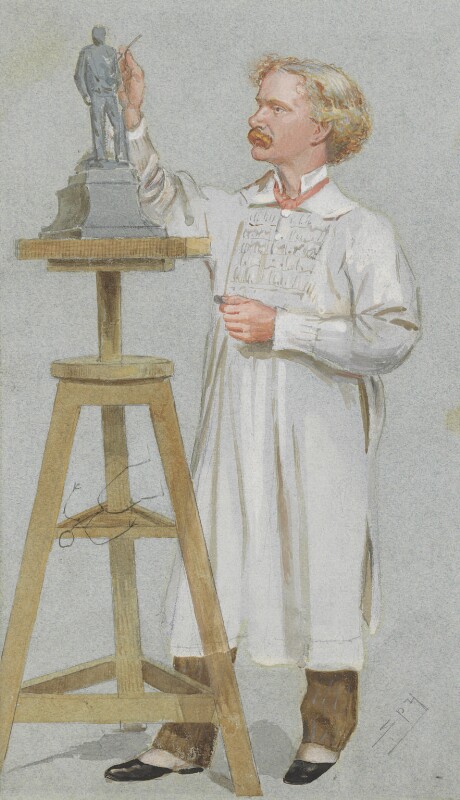 This is one of a large collection in the National Portrait Gallery of original caricatures drawn by Leslie Ward as ‘Spy’ for Vanity Fair. When published as a chromolithograph in Vanity Fair on 20 February 1892 it had the title Bronze Statuary, taken from the accompanying text: ‘He is the modeller of so many small bronzes that he is like to revive the Bronze Age; for his bronze statuary is becoming quite the thing.’[1] This refers to Thornycroft’s production of table-top versions of larger works, many of which were nude female figures. The statuette which Thornycroft is modelling here has not been identified, but has some resemblance to the figure of John Bright, whose statue by Thornycroft had been unveiled in October 1891;[2] a maquette for this was exhibited at the Royal Academy in 1892 (1868), and a statuette measuring 330mm high was also produced.[3]

There is no finer example of the sculptor’s art than that national memorial to General Gordon which now preaches to all who pass by in Trafalgar Square – the eternal condemnation of Gladstonian treachery.… He [Thornycroft] is the husband of a daughter of a County Court judge, and the younger brother of that John Isaac [Thornycroft] who builds most murderous torpedo boats, and he has a sister who can most beautifully paint the lily. He is a clear-complexioned fellow who, when he has on his working clothes, might well be taken for a countryman.[4]

The stick man half-way down the turntable may represent some form of lay figure; it appears in the print, and is not a later addition.

Ward exhibited a now unlocated portrait of Thornycroft at the Royal Society of Portrait Painters in 1894 (200) of which no details are known. It is possible but unlikely that this was the work exhibited.