1 of 11 portraits by John Comerford 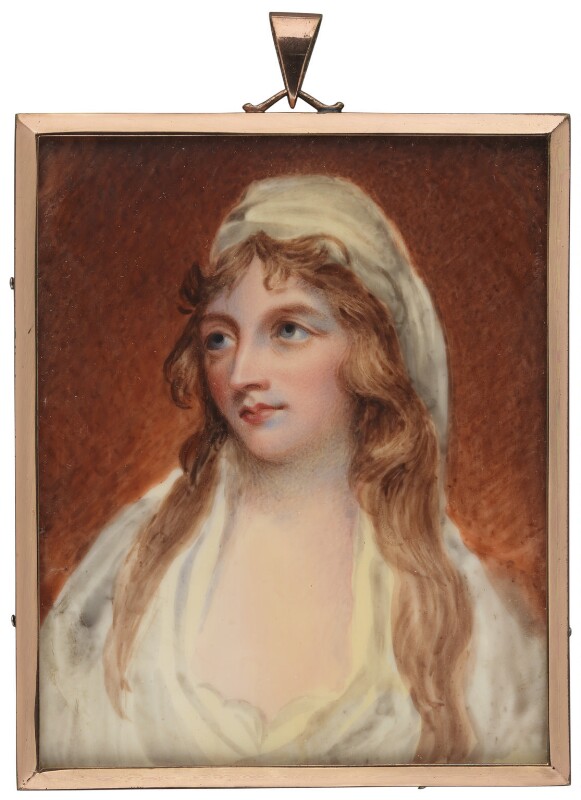 Inscribed on back in ink by Lady Morgan: Mrs Henry Tighe/author of Pscyche [sic]/by Robertson/SM, and lower in pencil: given me/by her nephew.
A similar inscription in ink on paper removed from the back of the frame and now in registered packet 1629 in NPG archive is also in Sydney Morgan's hand: Mrs Henry Tighe (born Mary Blachford) died 1810 - buried at Inistioge, Co Kilkenny. There is a plaster model of her in the churchyard - made by Flaxman - as marble was impossible to get - owing to the War. There is also an oil painting of Mrs H. Tighe by Romney which is in the possession of Lady Laura Grattan (not the same as miniature.) SM.
Dilke's small round collector's label is also on the back: The/Property of/Sir Charles W. Dilke,/76 Sloane St./Catalogue No 257.

The attribution to Robertson seems to have originated with Lady Morgan who was given the miniature by Mrs Tighe's nephew. It came to the Gallery with the attribution to Andrew Robertson but a letter from Basil Long (15 March 1929) about this and the miniature of Hugh Owen (NPG 975) casts doubt: 'if they are by him they are very unusual examples of his work'. J. Murrell agrees with this verdict going so far as to say it is certainly not by Robertson but could be Mrs Mee. My own suggestion of John Comerford is based on comparison with the Comerford miniatures in the V&A Museum and references in Comerford's notebook (MS in NPG library). The original was an oil by Romney for which Mrs Tighe had sittings in 1794-5, possibly in her wedding dress - she had married Henry Tighe in 1793; it was in the collection of Mrs Grattan-Bellow, Wicklow, in 1904 (H. Ward & W. Roberts, Romney, 1904, pp 158-9); a small version on wood panel was sold Bonham's 9 August 1973 (292). Romney's original was described by Ward & Roberts as 'Three-quarter-length in white dress with white turban with hair hanging down', which certainly matches the NPG miniature copy. Romney appears to have painted a variant however, copied in miniature by Comerford and engraved by Caroline Watson for the 1811 edition of Psyche and again by Scriven for the 1816 edition. This miniature differs from the NPG version in the shape of the dress and absence of head-dress; in the Scriven version she wears a head-band. Comerford however, according to his notebook, painted five versions, the earliest (unfinished) for Mrs Tighe's father Mr Blachford 18 April 1810; a 'copy' is dated 2 June 1810, another 30 July 1810, another for her mother-in-law Mrs Tighe of Rossana 2 August 1810, another 6 December 1810, and two more for Rossana July 1812 and September 1813. Two are recorded in the collections of the Earl of Mayo and E. K. B. Tighe (W. G. Strickland, Dictionary of Irish Artists, 1913, p 201); a miniature by John Comerford, called Mrs Tighe but probably Mrs William Tighe of Rossana, was at Christie's 18 March 1975 (51).
A MS catalogue of Sir Charles Dilke's collection (in NPG library) describes the NPG miniature in detail; it was bequeathed to Sir Charles by Lady Morgan whose autograph inscription is on the reverse.

Exhibition of the Royal House of Guelph, New Gallery, 1891 (627), as by Robertson lent by Sir Charles Dilke.