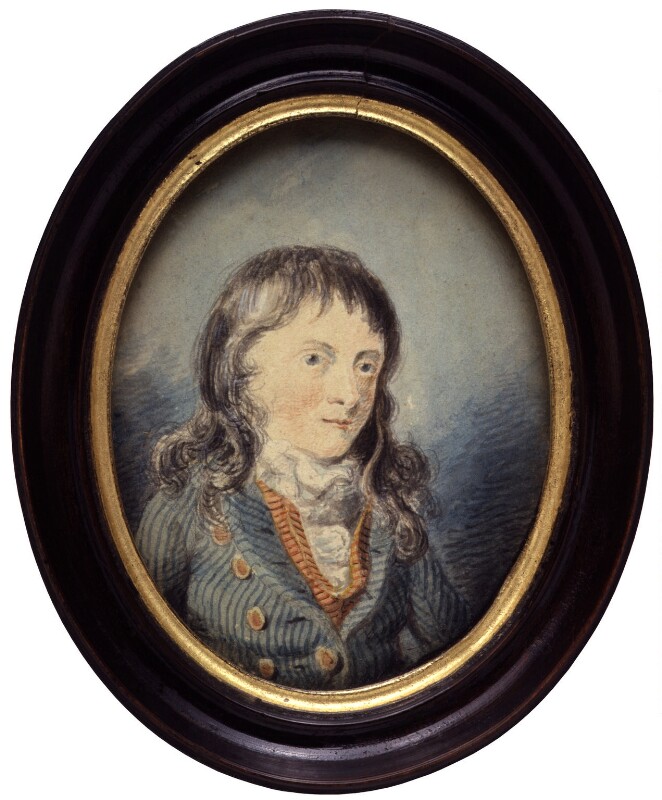 Inscribed in old handwriting on a paper label on the back: J W .M Turner/... R.A. .../done by himself when/about 15 Years Old and/during a visit to his/friend Mr Narraway/Bristol/1791 or 2.
The handwriting is not Ruskin's but possibly Miss Dart's.

This little coloured drawing has a clear provenance which can be traced back to Turner's visit to Bristol to stay with his father's friend John Narraway and his family in about 1790. Narraway's niece, Ann Dart, described the young Turner's appearance and behaviour in a letter to Ruskin who had bought the portrait from her in about 1860. Miss Dart speaking from recollection dated the drawing and the visit to 1791-2 when Turner would have been 17, though in the drawing he looks younger. She spoke of his reluctance to make a self-portrait when asked to do so by the Narraways. 'How am I to do it?' he asked. 'In your bedroom with a mirror' was suggested (Walter Thornbury, Life of Turner, 1862, p 24). Ruskin gave it to Mrs Booth and it was acquired from her son, Daniel John Pound the engraver, by Cosmo Monkhouse who described it in detail in Scribner's Magazine. The 'Cosmo Monkhouse Memorial Committee' gave it to the NPG in 1902.
No one has cast doubt on the authenticity of this portrait though opinions differ as to the sitter's age. Monkhouse, himself a considerable authority on Turner, considered the colouring to match the strong yellows and reds contrasted with deep greens and blues of the Bristol topographical drawings (Bristol and Malmesbury sketchbook 1791 in the British Museum). Miss Dart writing to Ruskin stressed Turner's shyness and dislike of self-exposure even at that age: 'When asked to make the portrait you have purchased he said it is no use taking such a little figure as mine, it will do my drawings an injury, people will say such a little fellow as this can never draw. When the portrait was given to us it was long hung on the stairs, my cousin saying that he would not have the little rip hung in the drawing-room' (Alexander Finberg, Life of Turner, 1961, p 27).

John Narraway; Ann Dart; John Ruskin (1860); Mrs Booth; Daniel Pound; Cosmo Monkhouse; offered to the NPG by his widow in 1901 and presented by friends of Cosmo Monkhouse in 1902.