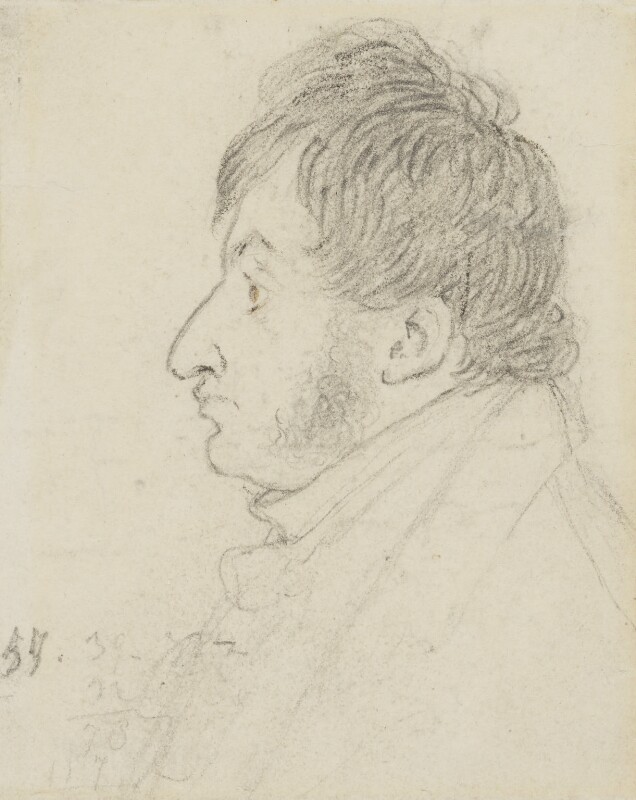 In a letter to his sister Betsy dated 12 December 1816 Leslie described his student days at the Royal Academy illustrating it with pen and ink drawings of Turner and Fuseli: 'Alas! I have failed in the likeness of Turner' (C. R. Leslie, Autobiographical Recollections, 1860, II, p 56). The letters and drawings descended in the Leslie family, his granddaughter writing to the NPG in 1958: 'I have in my possession a small pencil sketch of W M Turner RA drawn by my grandfather C R Leslie RA - 1816. I think the sketch was made while Turner was lecturing to the Students at the Royal Academy, my grandfather being a student at that time ... I notice that my father, the late G D Leslie RA, wrote in pencil on the back of the drawing that the paper used for the mount was some that had belonged to Turner and was given to my father by Ruskin ...' (letter from Miss Leslie 17 November 1958 in NPG archive). The drawing appears to have been a first attempt which did not please Leslie. A second drawing in pen and brown ink was also sent to his sister, descended in her family and was exhibited RA 1951-2 (738). This is inscribed: In my last letter I attempted to make a sketch of Turner the landscape painter but failed, I have this time succeeded better, the above is a good deal like him (private collection Devon).

The artist and given by his granddaughter, Miss L. Leslie, in 1958.