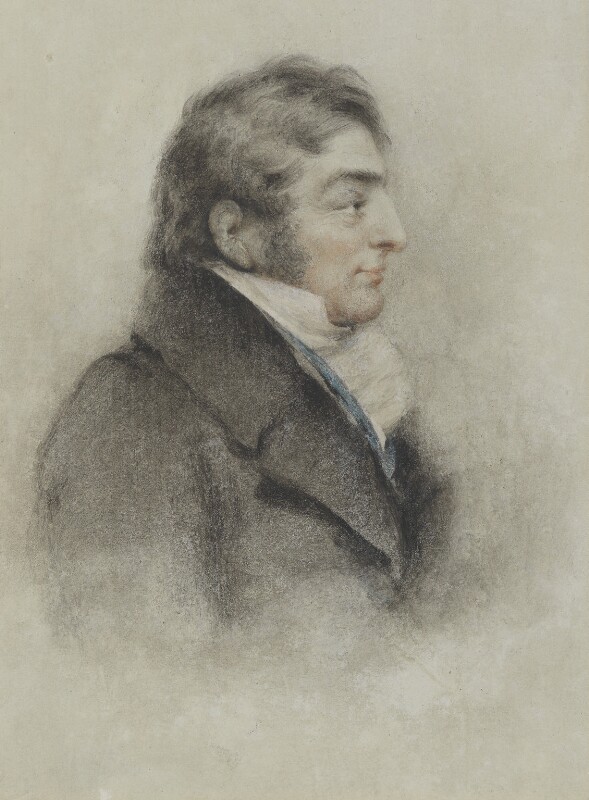 This drawing is a copy, with a blue medal ribbon instead of red, of a chalk and watercolour drawing in the BM, signed and dated CT Dream 1841; on the reverse of this is a sketch of a woman's head and the inscription: Made the morning after the Dream CT (Laurence Binyon, Catalogue of Drawings by British Artists … in the British Museum, 209). The British Museum drawing seems to have been made from a dream or memory and purports to show Turner aged about 40, that is 1810-15 after the two artists had quarrelled about engravings for the Liber Studiorum. The original is rather more vigorous and strongly accented than the NPG copy which is smoother. They were later worked into Charles Turner's famous mezzotint, issued in 1856 and showing Turner seated under a tree holding a sketchbook open at 'Mercury and Argus', exhibited RA 1856 and now in the National Gallery of Canada. In the prospectus for this mezzotint Charles Turner mentions 'the unfortunate circumstances I had to contend with' - alluding to JMWT's refusal to give sittings (Alfred Whitman, Charles Turner, 1907, pp 201-2). The head was combined with D'Orsay's drawing to make a small stipple engraving of Turner in a room holding a drawing and the 'The Shipwreck' on a chair beside him, published by Charles Turner in 1852 (Alfred Whitman, Charles Turner, 1907, p 202 where a drawing is noted in the collection of the artist's daughter Mrs Savery). A small watercolour head and shoulders in profile in rusty black top-hat and coat and generally more rugged appearance is in the Tate Gallery (2301), attributed to Charles Turner.
The NPG drawing was used as the basis for a five franc postage stamp in Luxembourg 14 March 1977.

Charles Turner's family and given as a wedding present to Mrs A. W. Gribble (of 64 Talbot Road, Bayswater), according to a label removed from the back when the drawing was remounted in 1939 (label in NPG archive).