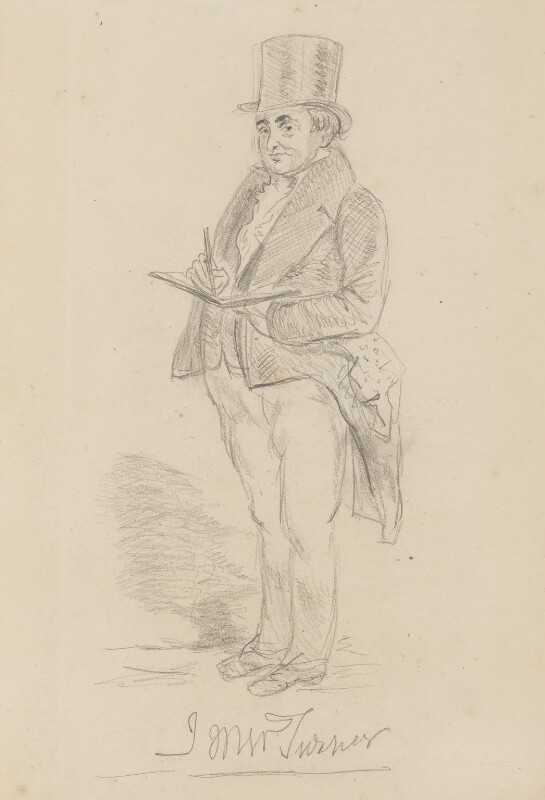 Inscribed with an imitation of Turner's signature in pencil and on the back in a later hand: Sketch of J.M.W. Turner/by Thomas Girtin (with an access flap signed GGN).

The drawing was the subject of extensive research by Sir Lionel Cust, Director of the NPG 1895-1909, who among other likely sources of information wrote to and interviewed the artist's son, who remembered the drawing well: 'I have often heard him assert that it was his - the one I presume of Turner with a big Coat painting and a painting rag hanging out of his pocket. My father made the sketch at the old British Institution. I believe it has been ascribed to other artists. It was certainly his …' (letter from Carew Martin in NPG archive). An elaborate story of its provenance was concocted by a former owner, G. G. Neill, and pasted on the back-board (removed in 1957 and now in the NPG archive), attributing the drawing to Thomas Girtin and the original ownership to John Wharton of Skelton Castle, easily disproved by Cust. Carew Martin believed it to be the original drawing by his father and the origin of the soft-ground etching in the British Museum from which spring the numerous copies and adaptations such as a watercolour drawing in the NPG Reference Collection, inscribed clumsily at right: J M W Turner RA/1844 and with ships in the background, formerly attributed to Sir John Gilbert; another version of this, similarly inscribed but along the bottom edge, was offered to the NPG by Howard Arundel in 1902, also attributed to Gilbert. A version with variations in the background and inscribed: R A 1844/J M W Turner R.A., was in the C. M. W. Turner collection in 1936; in this the writing closely corresponds to the inscription on Charles Martin's drawing of Dickens (see Richard Ormond, National Portrait Gallery: Early Victorian Portraits, 1973, p 144). A highly coloured watercolour version showing Turner in a bright blue coat, was at the Fry Gallery, 58 Jermyn Street, in 1980. Another good version, in a mustard-coloured coat and dated 1849, was with Andrew Wyld in 1982-3. It seems likely that all these stem from Martin's original drawing and the 1845 cut in the Illustrated London News.

Leonard Horner (London Institution); probably James Fennell of Fleet Street, then G. G. Neill and Mrs Alice Balfour who gave it to the NPG in 1907.

This drawing, or more probably one of the many versions, was lent to the Victorian Exhibition 1897 (271) by Frank Sabin together with similar portraits by Martin of Dickens and Samuel Rogers.

Woodcut in Illustrated London News 10 May 1845, p 292 with the adjacent block of 'Daniel Maclise' signed with monogram CM. A soft-ground etching is also known, vignette of identical size to NPG 1483, without artists' names or publication line (example in British Museum).