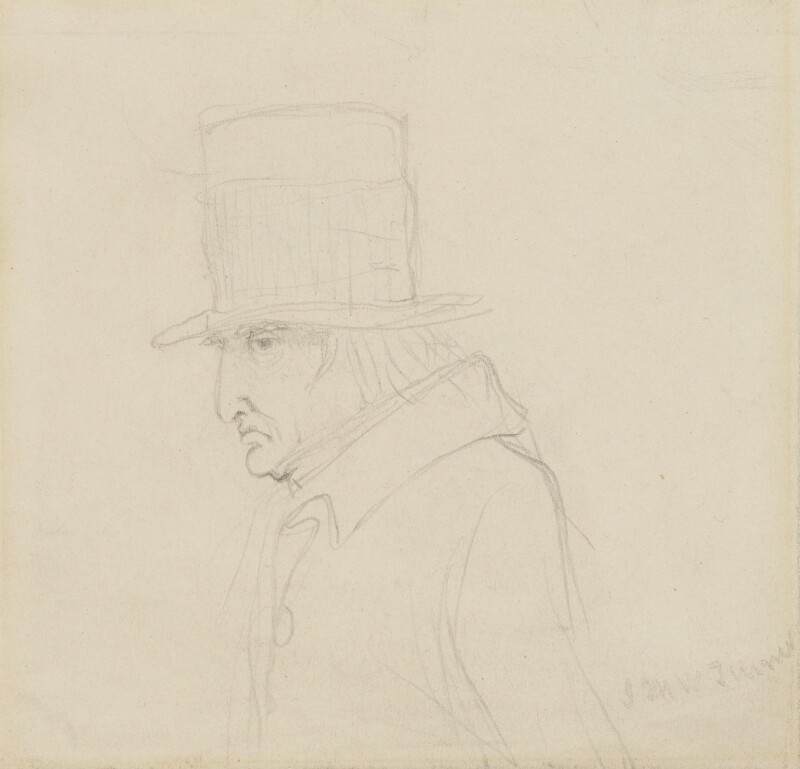 This slight almost caricature drawing of the morose Turner was probably done surreptitiously or even from memory and sent home to Lear's father to add to a gallery of similar doodles of prominent Royal Academicians. He recorded his first real sight of Turner in his diary for 3 May 1847:

Saw old Turner for he first time well. He is not at all 'Turner' as I should have expected to find him, but he is a little man dressed in a long tail coat, thread gloves, big shoes and a hat of a most miserable description made doubly melancholy by the addition of a piece of broad shabby dingy crape encircling two thirds at least. Thus clad and with his hands behind him appeared in outward form the greatest landscape painter that ever existed and one of the greatest geniuses, perhaps the world's greatest genius, in Art. There is no evidence of unhealthy biliousness in his face; it is red and full of living blood, and although age has left its mark upon him it does not seem to have taken his energy of mind, for this lives in that observant eye and that compressed mouth, the evidence of an acute calculating, penetrating intellect, which I may mention is seen in the whole contour of his face. He is a great little man - and all acknowledge it. I remember old Cooper told me some time ago that when any of the members of the Academy were 'in a mess' with the effect of their pictures a single application to Turner would put all right - he never failed and his words were listened to as the law. An instance of this occurred this morning. I was standing near Herbert's picture watching him introducing an object to the left of his figure of Christ, when a little old man who stood closely by me made a gruffly low sort of remark to him. Herbert turned round and with a very reverential air told him that he was going to introduce something to fill up the space to the left, at the same time showing him in his sketchbook the thing he intended. The little old man stood silent for a few seconds and then in a low but very decided tone said, 'You'll spoil your picture, you'll spoil your picture' and in a lazy sauntering movement with his hands behind him walked idly out of the room. Herbert seemed to hesitate and put down his palette, and I turned away. In a few moments I observed the little man return, and with a lazy indifference walk up to the picture, glance slyly at it, turn round and saunter out again. I looked at the canvas again and saw not a vestige of his proposed improvement. This little old man was Turner. They talk about his pictures being the wreck of a great mind. They are the glorious setting of a glorious sun.
(Transcript by John Elliot of C. H. Lear's diary in NPG archive.)
This vivid verbal description is unfortunately not matched by Lear's rather insignificant drawing which is among a collection of twenty-seven similar studies made when he was a student in the life school of the Royal Academy and acquired by the NPG in 1907 (Richard Ormond, 'Victorian Student's Secret Portraits' in Country Life, 9 February 1967, pp 288-9).

Profile to left in top-hat.