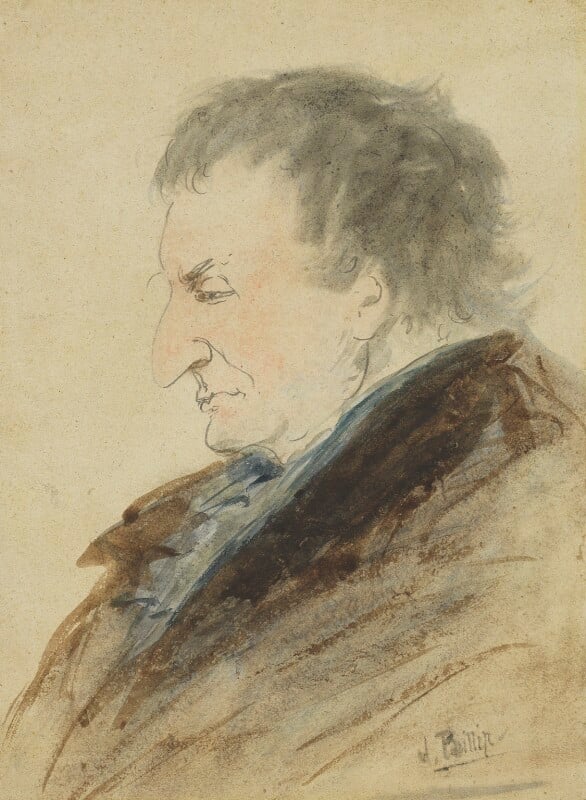 The drawing was brought to the Gallery on 5 December 1913 by W. G. Rawlinson, a renowned Turner scholar, who had been in touch with the previous owner, the Rev A. E. Clementi-Smith, in 1886 (letter from Clementi-Smith to Cosmo Monkhouse in NPG archive). Rawlinson informed the Director that he understood it had been 'sketched in 1850 during the illness preceding Turner's death'. It was accepted by the Trustees as an authentic portrait of Turner and appeared in the NPG catalogues (illustrated in the 1932 edition) as such until the 147 edition where 'identity doubtful' was added to the entry. In later editions it has been relegated to the section of 'Unknown Sitters'. There is no firm evidence either way though the likeness is close enough to other authentic portraits to make the identification with Turner feasible enough, and can be strengthened by Phillip's intimacy with James Cassie, a keen admirer and collector of Turner watercolour drawings (Angela Weight, John Phillip R.A., Aberdeen, 1967, no.76).

Rev A. E. Clementi-Smith (who knew nothing of its history), bought from him by W. G. Rawlinson ('many years before') and given by him to the NPG in 1913.