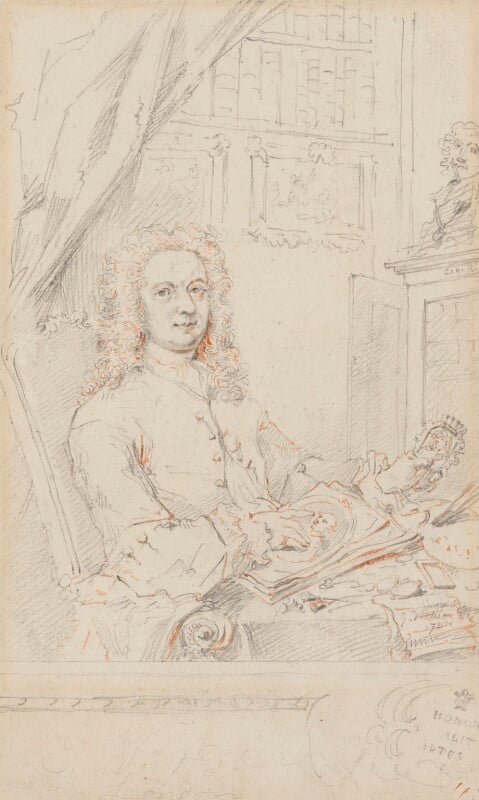 Signed or inscribed on papers at table edge: inv & del/G. Vertue/1741 and inscribed below: G. Vertue/London; within a cartouche to the right, below the Prince of Wales crest: HONOR/ALIT ARTES. [1]

This drawing is almost identical in technique and size with the self-portrait tipped into Vertue's notebook in the British Museum, Add. MS 21111. [1] Both are drawn in black pencil heightened with red on handmade eighteenth-century paper and show Vertue holding a miniature, apparently of his patron, the Earl of Oxford. The setting and the inscriptions are the same. The British Museum drawing, whose history is unknown before the nineteenth century, is more crisp and detailed. Close comparison reveals a number of small differences, e.g. in the drapery top left, in the area where the sitter's right sleeve touches the arm of the chair; in the drawing of the face and below the rule in the lettering and the crest. There are also two strokes of red, bottom right, in the British Museum drawing. Some of these differences may be held to point to another hand, and the question of authorship of NPG 4876 remains, to some extent, open. There is, nonetheless, sufficient resemblance of style not to exclude Vertue. It is worth bearing in mind that some eighteenth-century draughtsmen such as Richardson and Carmontelle sometimes made several drawings of the same subject.

Plump face, wig touching shoulders of coat; left hand holding miniature, his right hand resting on an engraving; on the table, miniatures, engraver's tools, brushes and palette; curtain drawn back behind chair revealing bookshelves with two small pictures below; to the right, an open cabinet inscribed at the top CAR.R, above, a small bust.

Laid down on a modern mount.