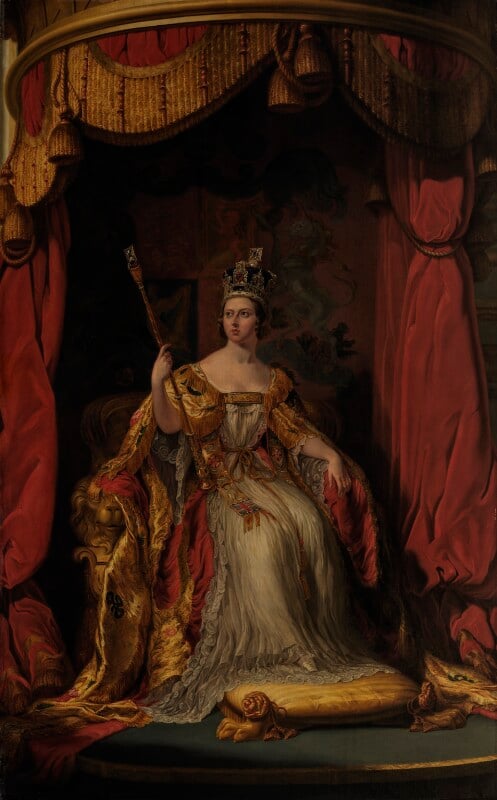 After failing to acquire the 1840 portrait of Queen Victoria by Wilkie in 1899, the NPG trustees made representations to the Queen, who not only presented NPG 1250, but gave permission for a copy to be made of her portrait by Von Angeli (NPG 1252). NPG 1250 is a replica of the full-length, life-size state portrait in the Royal Collection at Holyrood House. The latter, also purchased by Queen Victoria from Hayter's executors in 1871, is described in all the documents relating to its purchase as the original version (see references to papers in the Royal Archives above). Hayter's son stated that it had been retained by his father so that he could make copies for presentation and state purposes; several of these copies are still in English embassies abroad, another was given by Queen Victoria to the Crown Princess of Russia, and there is one in the Liverpool Town Hall. Until the discovery of the papers in the Royal Archives, it had always been assumed that the original version was Hayter's small full-length portrait in the Royal Collection, Windsor (46 x 34 inches), listed by C. H. Collins Baker, Catalogue of the Principal Pictures in the Royal Collection at Windsor Castle (1937) p 152, exhibited VE, 1892 (135). This is mentioned in Queen Victoria's 'Diary' for 18 August 1838 (Royal Archives, Windsor): 'The small one he has done for me, of myself in the Dalmatic Robes, is finished; it is excessively like and beautifully painted.' The Windsor version may have been the modello for the Holyrood portrait, or simply a reduced replica. Sittings for the large portrait are recorded in Queen Victoria's 'Diary' for 17, 20, 25 and 30 July, and 2, 4, 6, 7, 9, 13, 14 and 17 August 1838. The setting appears to have been imaginary; Queen Victoria is shown wearing the same costume as in Hayter's group picture of the coronation, and in his painting of her taking the coronation oath. There are several related studies by Hayter in the Royal Library, Windsor, and another was with Leggatt Brothers, 1944. An engraving by H. T. Ryall, after the portrait, is reproduced Connoisseur Year Book (1953), p 32. NPG 1250 is more colourful and more broadly painted than the Holyrood portrait, and it differs in certain small details, but is identical in pose and composition.

Healthy complexion, greyish-blue eyes, brown hair. Dressed in the royal crown, a white dress, and the heavy red and gold Dalmatic robes, holding the sceptre, and resting her feet on a gilded foot-rest. Seated on a gilded throne underneath a red canopy, with a fringe of tassels of gold, and a subdued red background with the royal arms. Floor in the foreground greenish-grey.

Purchased from the artist's executors by HM Queen Victoria, 1871, and presented by her, 1900.