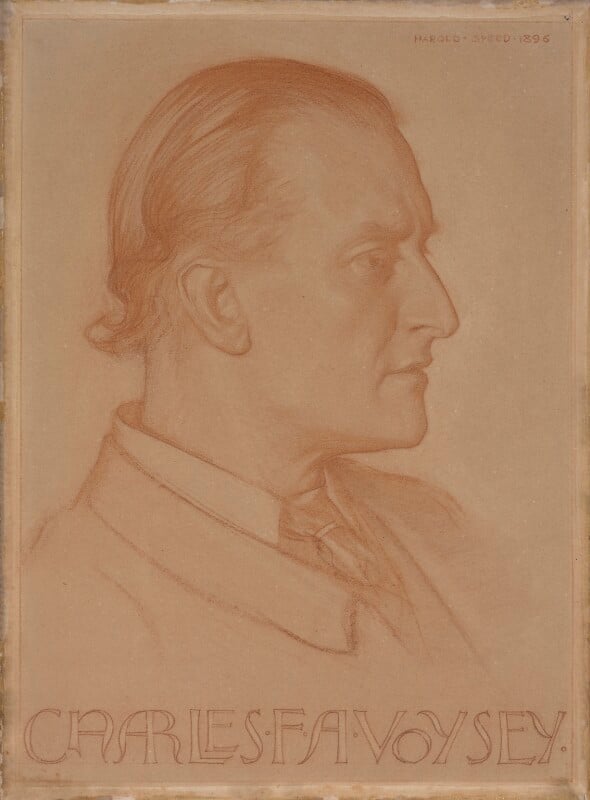 Signed and dated in red chalk upper right: ‘HAROLD.SPEED.1896’;
inscr. in red chalk full width below image: ‘CHARLES F.A.VOYSEY’.
On frame front lower edge a small metal plaque inscr.: ‘CHARLES F.A.VOYSEY by HAROLD SPEED’.
On old backboard handwritten label: ‘This portrait is lent to the A.W.G. / on condition that it is offered to / the Trustees of the National Portrait / Gallery ten years after Voysey’s / death in 1951. The Trustees / of the Gallery have expressed a / desire that it should be done.’

This is the earlier of two portraits of the sitter by the same artist in the National Portrait Gallery collection. At this date Voysey was approaching forty, with a number of commissions for larger domestic buildings that advanced his reputation.[1] The precise drawing and careful modelling through the use of unmarked areas to mimic highlighting emphasize Voysey’s aquiline features, ‘distinguished by the cut of his nose and the arch of his brow’.[2] These are further delineated by the use of a harder red chalk along the profile outline as well as on the ear and hair. For Speed’s later oil portrait of Voysey, see NPG 5140.

Painter Harold Speed appears to have been a youthful admirer of the sitter.[3] He was a fellow-member of the Art Workers Guild from 1904, and master in 1916. Chiefly a portraitist, he exhibited at the RA 1893–1955; eight other works by him are in the NPG collection. This drawing was commissioned by his uncle R.W. (later Sir Walter) Essex (1857–1940), sometime MP and founder of the wallpaper firm Essex & Co. Voysey, who contributed designs for both papers and showroom furniture, was a personal friend of Essex.

On Essex’s death, his executors returned the portrait to Speed, asking him to give it to a suitable institution. Speed told Edwin Lutyens he thought of offering it to the NPG. ‘Do you think he is worthy of a place there? I think he gave the Morris Movement a Modern turn that has had a great influence on the Arts & Crafts Movement, particularly abroad; and was one of the outstanding architects of our time’.[4] Lutyens forwarded this offer to Henry Hake, who advised Speed of the ‘ten-year rule’ and suggested loaning the drawing to the AWG in the interim, a proposal endorsed by the NPG Trustees in February 1942.[5]

This arrangement is recorded in the old label, whose authorship is unknown, and in somewhat garbled form in the archives of the AWG, where a report dated January 1943 notes that ‘The Trustees under the will of the late Past-Master C.F. Annesley Voysey have bequeathed his portrait, painted by Past-Master Harold Speed, to the National Portrait Gallery’ and that the AWG had accepted temporary custody of the picture.[6].

In 1957, when Speed was again in contact with the NPG, he reminded J.F. Kerslake of the drawing, which he now said had been ‘left in his will to the National Portrait Gallery by the late Sir Walter Essex’.[7] Kerslake asked for the work to be submitted to the Trustees, but before this could happen, Speed died and correspondence was suspended. In 1959, following the Harold Speed memorial exhibition, Charles Kingsley Adams ascertained that it remained with the AWG, which delivered it to the NPG, where it was accepted in October 1959.[8]