2 of 9 portraits by Harold Speed 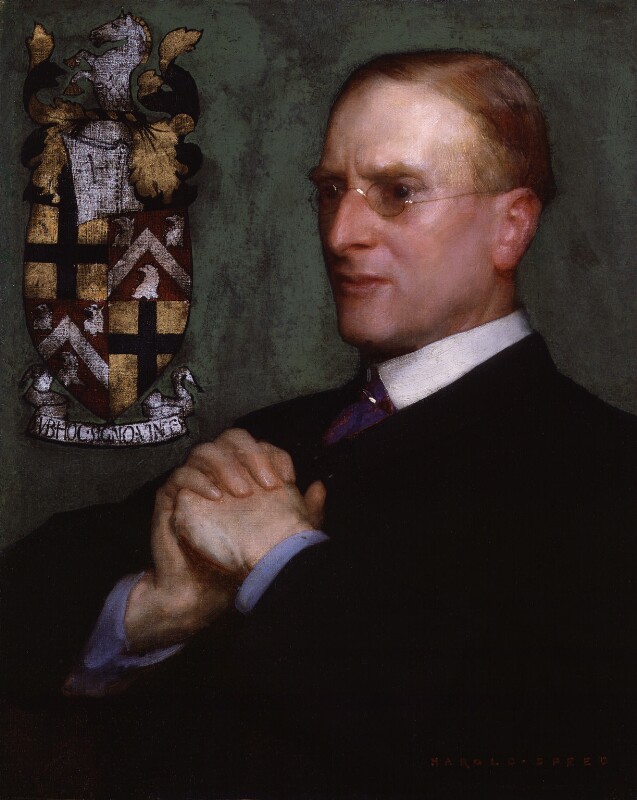 This portrait of the sitter in his late forties is one of three by the artist, including NPG 4116 and a work allegedly from 1888 (see NPG 4116, note 3). It appears to have been executed for the artist’s own satisfaction, rather than on commission or for sale. As such it may illustrate Speed’s admiration for the sitter, who by 1905 had built a reputation for progressive domestic architecture, publicized in Hermann Muthesius’ Das Englische Haus (3 vols, Berlin, 1904–5), but was not well-known to the general public. Speed’s portrait vividly conveys Voysey’s fastidious character and distinctive blue shirt with stiff white collar. The green background is suggestive of the colour schemes favoured in Arts and Crafts homes such as those designed by Voysey himself.

The heraldic shield depicted carries the inscription ‘SVB HOC SIGNO VINCES’,[1] a traditional Christian motto referring to the Cross. The sable cross on a gold field seen quartered is attributed to the Vesey/Vezey family. The other quartering appears unconnected with any ancestral line relating to Voysey or his wife. Perhaps surprisingly, since Voysey was proud of his resemblance to John Wesley, brother to his great-great-great-grandmother, and on one occasion sat for a portrait of Wesley, no reference to this illustrious connection is made here.[2]

According to his obituary in The Times, the artist Harold Speed was ‘an excellent academic painter, his work being more remarkable for correctness of drawing and suavity of execution than for depth of feeling or interest of design’.[3] Other portraits by him in the National Portrait Gallery collection include Sir Henry Campbell-Bannerman (NPG 5777) and Viscount Grey of Falloden (NPG 3120). For more information on his relationship with Voysey, see NPG 4116.

Exhibited at the artist’s memorial exhibition in 1959,[4] the portrait was first offered for purchase by the artist’s daughter later the same year, but declined in favour of NPG 4116 and only acquired nearly two decades later, when Voysey’s reputation had risen considerably.

1) ‘Under this sign you will conquer.’
2) If the heraldic elements hold importance, the green background could allude to Voysey’s mother’s maiden name.
3) The Times, 21 Mar. 1957, p.14; also quoted in the Introduction to Speed’s memorial exhibition catalogue, 1959.
4) The catalogue in NPG NoA (Harold Speed) contains a hand-written note identifying the pose as half-length, three-quarters to right, hands clasped, and the price as 50 guineas.

Presumably the artist; bequeathed to his daughter Delia Speed Alexandrowicz, and offered by her in 1959; subsequently purchased by Robert Frank in conjunction with Hartnoll & Eyre (Christie’s, 29 Oct. 1971 (136)); offered July 1972 by Charlotte (Mrs Robert) Frank, London; sold on behalf of joint owners the late Mrs Frank and Hartnoll & Eyre at Sotheby’s, 30 Mar. 1977 (396), when purchased for NPG.